Past Time Rail
The Spinnin' State

Notes :
(1) 37's were due on at Crewe but they were running late off Bescot due to the original driver being out of hours. 60099 took the train to Stafford where the 37's took over. 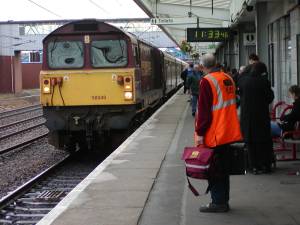 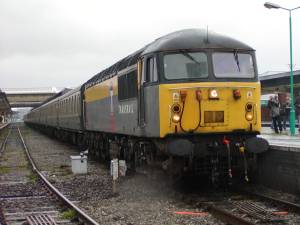 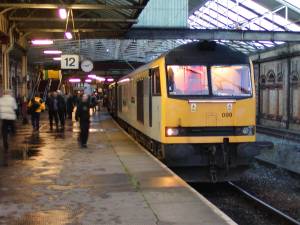 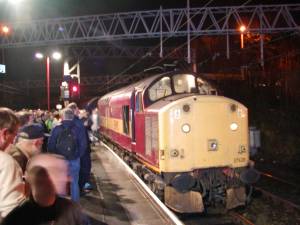 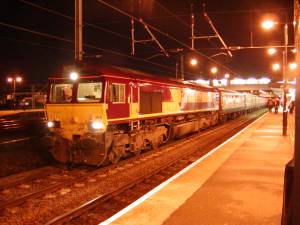 Something different on the menu this particular Saturday - Past Time Rails' first attempt at an enthusiast "spin & win" tour! Although the tour had a pick-up at Peterborough, the original tour spec had loco changes both ways at the station, thus it was not really a viable joining point, leaving me contemplating a drive from/to Potters Bar. . A couple of days before the tour however I heard that the loco change was to be in Peterborough West Yard - OK a real "short leap" but at least all locos could be sampled and the day would be two hours shorter as a result. A call to Past-Time Rail's office confirmed this, so Peterborough it would be.

Managed a decent long lie on the Saturday morning, then headed for Peterborough only to get caught in a very large queue of Christmas shoppers (oh, for an earlier departure time).

58049 (as booked) rolled in a few minutes late and those of us who had joined at Peterborough soon settled back for the very short run into Peterborough yard...and our first loco change! 56049, the only quoted engine that was dud for me, duly took over for the run to Derby. Not the most exciting run so I'll not bore you with the details.

Change of direction at Derby - 56049 passing the train over to 60099. An early arrival meant time to get a bag of chips too! 60099 was a surefire winner for all on board - this being one of only a handful (three?) 60's never to have worked a passenger train. A strange station announcement was made, showing the level to which we seem to go these days - "in the interests of safety could those people taking photographs please not use the flash". Hmmm....

The run to Crewe was also straightforward. On the approach it was confirmed we would all have to get off as the stock was to be taken out to the carriage sidings by the 37's.

Nice to see 47851 as we pulled in - just out-shopped in two-tone green with black two-dot headcode boxes. It was also carrying its old D1648 identity on one end.

High time for a farce...and one duly produced!!!

No sign of the 37's....turns out the driver was up on hours so they were still some way away. OK, run the "brick" round and set off south to meet them en-route. Stafford was the intended meeting point which would leave us running a bit late as this was not a booked stop. An announcement was then made to say the following booked loco change might take place in Peterborough station rather than West Yard as booked. Great - in order that those people stupid enough to book on tight connections would make their train home, others of us would miss out on one of the days locos. For one of my travelling colleagues it was extremely frustrating as he was only going to score 60099 and 66131...but he'd also joined at Peterborough thus lost out on half of what he should have had.

Almost a farce at Stafford - 60099 pulled up close to the signal and there was no way the pair of tractors were going to "fit" inside the signal. The 37's appeared and were coupled on, we all boarded then set off without the anticipated set-back to get the locos inside the signal.

South of Stafford and engineering works meant we were routed via Bushbury Junction, Walsall and the Sutton Park line to Nuneaton. A short pause here to change crew became a long pause as the ongoing crew were late! Once they arrived we headed off via Leicester to Peterborough.

It was confirmed that Railtrack had agreed to the loco change in Peterborough station, which was quite annoying as we were gaining back time at each timing point. Indeed - on the approach to Peterborough it was looking like a potential 30 minutes early arrival into the station - time enough to have made the loco change as planned.

At New England North Junction we found ourselves routed into the West Yard....we stopped, alongside a class 66....

....and after a couple of minutes the 37's were taken off. Looks like Railtrack and/or EWS had decided to stick to the plan after all. 66131 was duly attached to our train and we set off on the half a mile or so run to the station where we still arrived in time so that those people with tight connections made it home.

Verdict :
Not a bad day out, but in my opinion it started too late in the morning. Coupled with a late return it gave no real room for late running - this then came to the fore owing to the delay in the 37's getting to Crewe, resulting in a potential change of plan (the last loco change). In the event it looks like the panic was premature and Railtrack/EWS simply did their own thing anyway and I walked away with five winners out of the six locos we had!

Will I book on the next Past Time Rail spinner....hmmm, maybe.

No mileages were given out with the timing sheets but PRAR has provided the following;

No attempt has been made to verify the mileages given above.