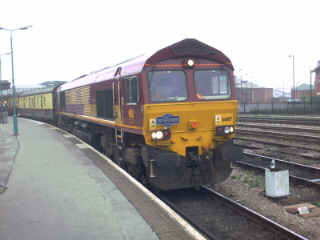 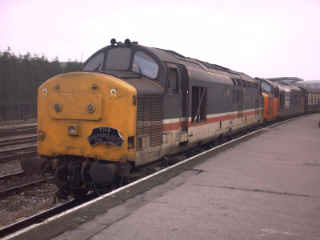 When the 'Catherine Wheel' tour was first advertised, I decided it was a tour which I would give a miss. The only track I required was the Bolsover branch (a little over two miles long), and the chances were the Class 20s would not be required haulages, since I only needed one of DRS's operational 'choppers'. I quite like Class 20s, but even so, £45 seemed rather expensive for the day.

Things changed during the days leading up to the tour, when I learnt the DRS had pulled out of providing locos for the tour, and it would now be hauled by a pair of refurbished EWS Class 37s.  If one or both of these were to be required, then for me the tour would be worth doing - however, not everyone was happy and I know the change of motive power caused some people to cancel their bookings, as did the re-timing of the train two hours earlier by the original provisional timings.

Over the next few days, various locos were quoted as being possible candidates for working the tour (including 37707+37886 which were 'in position' at Warrington!), but by Friday, it seemed likely it would be two of 37674/685/704/710 - three of which I needed. The last e-mail I received on Friday night said it would be 37710+37685 (both required), and when I got up on Saturday morning at 6am and switched on my PC, confirmation was received that these two were on the train - which at this time was travelling somewhere between Manchester and Stockport!

Unusually for a railtour, I had decided to travel to it by train. I drove as far as Leeds, being held up just two minutes from home by another pair of Class 37s - 37047+37057 on the Water Cannon train to Knaresborough. Haulage from Leeds to Derby was behind 47822 on the 06.40 York-Birmingham - only a few months left now for the Virgin 'spoons'. There was a crowd of familiar faces on board, most of whom were heading for the tour.

The tour arrived at Derby just a few minutes down, with IC liveried 37685 leading LoadHaul 37710. I'm sure for many people the locos were a disappointment - 37685 was a based at Inverness and a regular performer on the in the early/mid-90s (hence its reason for carrying InterCity livery) and also worked a Hertfordshire trip to Rylstone a couple of years ago.  37710 had already done two tours in the past few years - the HRT 'Grimsby Reaper' (which derailed) in November 96, and more recently an A1A Charters special to Lowestoft. Despite this, the tour seemed reasonably well loaded, and I obtained a seat in the buffet car, being relieved of my cash before the train departed.

At Derby, 66187 was added to the rear of the stock, which became the front for the next part of the tour - a visit to the Sinfin branch. Although there is still, on paper, a service to Sinfin, this is now provided by a taxi, and it is some years since a passenger train travelled along the branch. Quite a few people on board required the branch, including at least one who cleared his 'passenger' track. I'd already done the line on a DMU back in August 1991. Amazingly, a few people alighted from the tour at Sinfin!

After leaving Sinfin, I wandered up towards the front of the train to enjoy some Class 37 thrash, and found a spare seat close to some friends in coach A. There was plenty of noise from 37685+37710, and due to some slack timings and a booked pathing stop at Ambergate Junction being missed out, the tour, which had left Derby about 20 late, was only a couple of minutes down when we reached Sheffield, where a crew change took place.

At Sheffield we waited, and waited, finally departing at 12.29, now 36 minutes down. It turned out there had been a suspected problem with the Generator Van at the rear of the train - not the first occasion this has happened (see reviews on The Blyth & Tyne Meanderer and Anglain Capitalist for more info!). We ran via Rotherham Centraland Thrybergh Junction to Bridge Curve at Doncaster, where we waited again - this time for 18 minutes. The tour then proceeded south, to St Catherine's Junction. Various locos were viewed on Doncaster depot and yard, including an RfD Class 90, 90233.

Upon arrival at St Catherine's Junction, we found out what the delay had been. It turned out that the tour had not covered the lines at the rear of Belmont Yard as planned (some of us hadn't even noticed!) owing to EWS having failed to clip the points.  Looks like that is becoming a frequent occurrence on railtours! After reversal, we departed St Catherine's Junction running 49 minutes late. The 'shed' lead the tour as far as Kirk Sandall Junction, where another reversal took place. We headed back towards Doncaster behind the 37s, taking the avoiding line which crosses the ECML and runs bast the back of Doncaster Works - too far away to see anything though.

We rejoined the outward route at Hexthorpe Junction, and after a brief crew change at Mexborough (presumably to pick up a pilotman), ran via Swinton and Rotherham Masborough where we joined the 'old road'. We got quite a good view of Booths scrapyard, where quite a few 31s were present, along with 50001, which must have been there for almost 10 years! It was then onto the Bolsover branch, my piece of required track for the day. I was pleased that the train managed to cover the branch properly (i.e. not reverse half way up it), and we passed the coking plant, running as far as the run round loop. We left Bolsover exactly 1 hour late (RST had been achieved!), rejoining the old road to Chesterfield  near Barrow Hill.

The return to Derby was via Alfreton, Langley Mill and Toton (can't say much about what was on the depot - I was asleep!). Two pathing stops were booked on this section, and as the tour didn't stop for either of these, a lot of the lost time was made up. Arrival at Derby was just over 20 minutes late, and after the 66 was detached, I watched the tour depart, by now just a couple of minutes down.

My journey back home was by HST, a Midland Main Line set to Sheffield, for a Virgin one forward. I'm typing this two hours after I got home, and the tour should currently be somewhere between Stockport and Crewe!