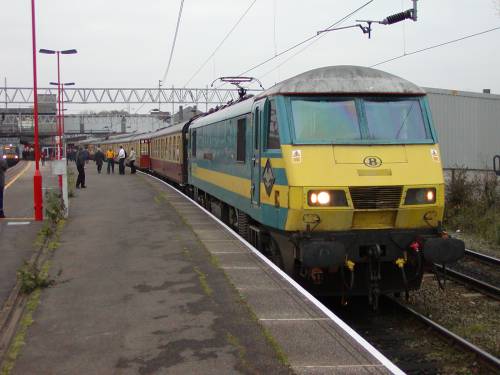 Another November and another Past-Time Charter to Edinburgh to enjoy. Per normal practice I did this one in premier class in the company of my parents and sister. Seems the after-effects of Hatfield still linger on with the finalised timings seeming to offer a longer day with less time in Edinburgh than on previous years, not that that really bothered us as we had the "full dining experience" to keep us entertained there and back.

We were at Northampton station in plenty of time and the train arrived a few minutes early behind Belgian Railways liveried 90028. A disappointment to have this loco again as it had hauled the same tour in 2000. A friend was also hoping for 90035 and we knew that particular Skoda was "in position" in London. Fired off an sms message to my friend to tell him not to bother heading for the tour then the phone went off for the day so as not to spoil the atmosphere in the premier class.

A little annoying to arrive into Stafford to an announcement that we were running some 25 minutes early, beinga booked pick-up we couldn't translate our good run through the West Midlands into extra time in Edinburgh. At least that gave a chance to photograph our train and chat to a few acquaintances on the platform. Having just finished breakfast (see details at bottom of Page) it was a chance to walk some of it off too!

The remainder of the journey northwards was quite uneventful....until the run up Beattock when we were slowed severely. Turns out we'd caught-up the Northern Belle railtour which was also headed to Edinburgh. That was finally passed at the summit as it had been looped there - a RES 47 on the rear (47774) plus a royal one on the front (47798)! Apparently train heat problems had dictated each as heating part of the train. Presumably the additional 118.7 tonnes on the rear had taxed 47798 "Prince William" on the climb up Beattock. A fast run as far as Slateford then the normal stagger to Waverley ensued, arrival however only being two minutes later than booked. The Northern Belle was pretty close behind us, soon arriving on the adjacent platform.

My time in Edinburgh was spent sampling a couple of reasonable bars with a fellow Euro-crank who had come over from Glasgow to meet up with me. We were joined by another (Northampton-based) crank once he'd finished his Christmas shopping! The subject of conversation was mainly about the potential for a rail-based holiday in India in late 2002....watch this space!

Little to report about the return leg of the tour - I was too busy being fed and watered to really notice anything going on outside. The only thing of any real note was that we were sent from Bescot to Stechford via Soho and Birmingham New Street rather than the more normal routing via Aston. Not really sure why this happened but at least it was different!

Arrival back at base was 6 minutes early, marking the end of another good day out.

Route, Distances and Timing's (Actual only)

No timing sheet was supplied to passengers so the tabulation below is solely actual passing timings as recorded by myself.

Your choice of
Breakfast Fruit Compote
(with a selection of citrus fruits & melon)
or
Cornflakes, Bran Flakes, Muesli, Porridge
or
Stewed Prunes

(Breakfast lasted from somewhere about Coventry to Stafford!)

Haggis and Neeps
or
Chef's Soup of the Day

Loins of Lamb Noisettes
With Cranberry, Mint and Brandy Sauce

Cream Filled Profiteroles
With Chocolate Sauce
And a Selection of Cheeses, served with celery, grapes and biscuits.

(Dinner lasted from somewhere around Carstairs to Crewe!)