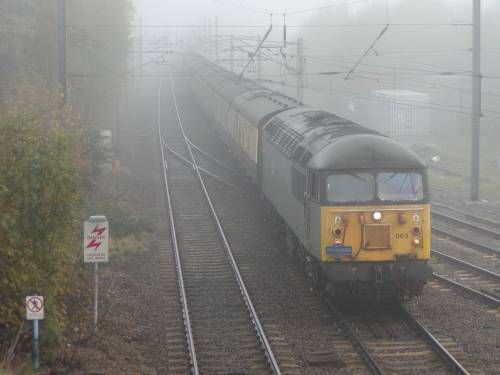 56063 pulls into a misty Barnt Green station on the run south.

Go here for some more photos of the tour.

Hard to believe but my last railtour was back on 1st September - almost two whole months ago!

This tour offered me quite a few different locos and also the required track between the two stations at Yeovil. Not too impressed however to arrive at Barnt Green to discover the free car park was now £2! Quite amusing watching other people turning up to discover the same though

56063 rolled up bang on time - winner no.1 for the day. Settled back in to coach A, disappointed that it was at the back, so a mostly thrashless day in prospect :-(

The grid took us to Swindon via Stroud. Two choices here - stay on for an hours fester in Cocklebury Yard, else bale for an hours fester in Swindon. What a decision... For someone the decision appeared too much and they decided to bale after we started moving, resulting in a full brake application and a couple of minutes delay before we set off again. Think they got a severe ranting at too - and quite right!

As we pulled into the yard (I chose to stay on board, time for a visit to the bar and catch up with some others who had also stayed on) we passed 66156, our next loco. 56063 dropped off and the shed was stuck onto our end. After the booked fester we headed back to Swindon station to pick up those who had baled. 66156 continued to Westbury where we passed through the station to stop in the "down reception" line. Time to lose the shed in favour of bone 030 - my first "dud" haulage of the day. For the track bashers there was the rarity of traversing the "link line" away from the down reception line to Fairwood Junction.

The track treat for me for the day however was the required line from Yeovil Pen Mill to Yeovil Junction, which was travelled over as booked. 58030 continued via Exeter (long booked festering on the approaches, but still we were running early!) then on to Taunton.

An hour or so break here - time enough to watch 58030 come off the train and hand over to the unusual combination of 67026 (dud for me!) and 59203 "Vale of Pickering". Some discussions about the ability for these two different classes to "multi" but the required cable was soon produced and hooked up between the two.

Just before leaving Taunton 47815 appeared on a fGW service to Paddington. We departed Taunton bang on time. Any doubts about whether both locos were working were soon dispelled as the acceleration on load 13 was rather fast.

By Bristol we were again early, the non-stop run through Temple Meads being quite fast and accompanied by some front coach bellowing at the rather bemused looking passengers on the station.

At Severn Tunnel Junction we were turned on to the relief lines for a slow stagger to Newport - despite that we still arrived some 20 minutes early. 45 minutes then to lose the GM pairing and get 60062 on the other end, a job achieved with oodles of time to spare.

Our route out of Newport was again on the relief line, including the Bishton flyover. At Severn Tunnel Junction we took the line to Chepstow and Gloucester. At the latter it was time for our last booked loco change of the day, 60062 giving up the train back to our first loco, 56063.

The timekeeping remained on-spec as far as Stoke Works Junction where we were halted for a red - destroying the drivers chance for a fast run at the Lickey - not that those of us on board were so bothered. Like quite a few others I'd moved up to the front of the train after the Cheltenham stop so as to enjoy the thrash from Bromsgrove. After the driver phoned the signalman we got a green and then proceeded to stagger along - as we approached Bromsgrove station the reason became clear, the local police helicopter was out and there were police on the track searching for someone.

Once we passed them it was thrash all the ay to the summit - on load 13 the grid did very well considering we hit the bottom at about 30mph and we were only just a fraction slower by the summit three miles later. Well impressive in fact.

Baled at Barnt Green after a good day out, the sound of 56063 departing being heard for quite a distance.