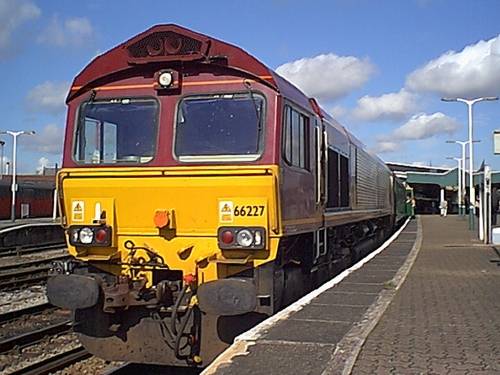 The Bristol Rover was the latest of Hertfordshire’s forgotten tracks railtours, this one covering three branchlines around Bristol and Swindon’s Highworth branchline.  Needing three of the four branches, and the exciting possibility of top and tail yings I booked on this tour without hesitation!  With a week to go the envelope containing my ticket arrived and I decided to get on at Ealing Broadway, as I didn’t fancy a very early start to get across London to Finsbury Park for 7:24.

Whilst making my way on the very slow district line (an overtime ban by the drivers causing fewer trains to run, which is very annoying) text messages were being sent to friends at Finsbury Park to ascertain the identity of the aforementioned ying. (The dictionary tasted fine thanks) I discovered it had yet to leave, as the rain started to pour.

Was this an omen of the day’s travel ahead?

Arrival at Ealing Broadway was greeted by the news that 66227 was 10 minutes late in leaving.  165’s and 166’s passed through the station as the clock neared our departure time, and in the distance the now all too familiar triangle of lights appeared.  I started to walk down platform 3 (now getting wet) only to be informed the tour was leaving from Platform 1. So I walked back, crossed the bridge, and got wet again walking to the rear of the train and my coach.

Meeting the regulars onboard the day had truly started. What can be said about the journey to Reading?  Not a lot, the banter was flying in coach L, and that was as interesting as it got until Didcot where 58037, 60011, 37042, 674 and 520 were all stabled.  We stopped on the Didcot relief line to allow a fGW HST to pass us.  Whilst contemplating how boring this review would be we neared Swindon, the first branchline of the day.

We passed 66149 in cocklebury yard and paused momentarily in platform 3, before continuing to the Up & Down goods line. Here we waited for 66149 to be attached.  We waited, and waited.  We were then informed that the Saltley men who were to take our train up the branch were delayed on a connecting train, thus 149 was attached and pulled us back through the station to the up rec line.  We were 20 minutes late at this point.  After numerous First Great Western HST’s had passed us big cheers went up as the men were spotted, and a short while later we set off.  We were now 45 minutes late!  The Highworth branch is only half a mile long, passing a scrap metal yard and the sidings for the rover plant, here we reached Stratton crossing, our limit, where two locked 10ft gates lead into the North sidings.  A quick reversal and we were back on the main line heading for Bristol.

Normally at this point I’d say we had a nice quiet run into Temple Meads and a quick trip around Bristol, but not today.  Shortly after Thingley Junction our train came to a sudden stop. A signal had changed to red before a driver had gone through it on the train in front of us. A few minutes passed then we were on our way again, until we stopped again this time in the middle of Box tunnel! This was no ordinary stop however.  It was revealed that someone had pulled the emergency cord in one of the coaches and the driver, quite rightly, had stopped all trains in both directions.  Eventually we got going but now after all these events we were 72 minutes late, and, despite a spirited run by 66227 we pulled into Bristol 68 minutes late.

We now only had an hour in Bristol, but if you thought our problems were over, they had just begun!

Our departure time of 13:30 came and we departed and headed towards the second branchline at Tytherington. As we passed the suburbs we started to slow and we came to a halt at Stapleton Road.  More than 20 minutes passed and an announcement was made that a freightliner 66 on a set of Railtrack wagons had set off a hot box alarm.  Once we were underway the errant 66514 was soon passed and we went through Bristol Parkway, Yate and then turned left onto the Tytherington quarry branchline.  This 6 mile branchline was interesting in that there were 2 driver operated crossings, and Tytherington tunnel is not lined with bricks and is natural stone, a very impressive tunnel!  We got as far as the points at the end outgoing sidings at the quarry, as we would have needed an industrial mower to get any further down the line! Still 20 minutes late we reversed and headed back towards Yate, curiously going out on the incoming line! Here we waited for a path running wrong line towards Westerleigh. We waited, and waited and waited some more. Finally, we crawled through Yate 40 minutes late and straight on onto the single line towards the oil and refuse terminals.

We didn’t get very far down this line stopping at the first set of points.  Strangely we couldn’t travel back towards Yate until we had a path, because we were a passenger train! Is this unusual?  Once we were finally underway we travelled back through Yate and back onto the Tytherington line up to the 40 wagons mark on the incoming line.  Again we waited, as again we had to travel wrong line towards Bristol, until Westerleigh Junction where we crossed over and started on our final branchline of the day.

For the second time in two months we headed straight on at Bristol Parkway and onto the Avonmouth branch, again reaching the signal gantry at the head of the Avonmouth complex now only 27 minutes late.  Now we started the long run back towards London, but as had been the case all day our strange braking applications continued.  We rounded Dr Days junction and even though we had a green light we stopped, as did the driver of a 158 leaving Bristol, then we proceeded! Were we teasing the driver of the 158? Hmmmm. Stranger still was the brake application before Bradford on Avon station, then the red aspect at Bradford on Avon station!  After these two events we were back to running 25 minutes late and continued towards London bypassing Westbury. A 24-minute pathing stop at Newbury reduced our deficit to 2 minutes, by the days accounts this was a miracle! And we pulled into Reading a mere 4 minutes late.  In most railtour reviews a nice easy end to the day would follow, and this almost happened, until we approached West Ealing.  Here we had a red signal in front of us.  As did the fGW HST that pulled up alongside, and the two units heading out of London on the up lines!  Thoughts flashed back to an incident in February involving a fire and a signal box.  Was 73109 available at such short notice?  As strange as it had happened all of a sudden the lights turned green and everything moved! Personally I blame aliens, or strange black clothed creatures with black nail varnish and miserable face expressions that dance weirdly in the corner at parties.

Amazingly only 10 minutes late, we pulled into Ealing Broadway and having bade farewell to my friends I left the train and watched it depart into the black London night.  One word stands out above all others about this railtour - stagger.  We staggered from branchline to branchline, and braking application to braking application.  How we made it home at such a reasonable hour is probably due to the tremendously slack timings provided nowadays by Railtrack. But on the whole a very successful tour once again by Hertfordshire covering all advertised track.

Roll on the next tour!