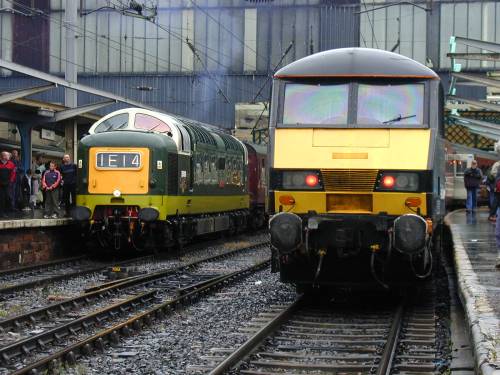 What on earth would possess me to get up at 3am and make my way to Preston for a railtour promising no new track and only one loco for haulage all day - and a dud one at that?

Well, my arrival into Preston on this Saturday morning a little before 7am was greeted by the unmistakable sound of a Deltic, reminding me why I had chosen to book on this tour despite it meaning a near 24 hour outing for me - almost 500 miles behind D9009 "Alycidon" was a treat not to be missed!

Finding our coach, A, at first looked to be a challenge as the coaches were not lettered in strict order however it was soon located as the rearmost of the nine coaches. Bags stowed at our seats and there was time to head to the other end to photograph no.9 and meet and greet a few other friends who were also on the tour. "Alycidon" departed bang on time to the usual clouds of blue-white exhaust.

The start of our route was pretty well all-new for me with a Deltic up-front - we made our way to Manchester Victoria with pick-ups at Chorley (where we departed 2 minutes early!) and Bolton. Time for another photo at Manchester Victoria then we were treated to quite a lively run over the Pennines (via Summit Tunnel) to Bradford.

Coming in to Interchange station from the Halifax direction with a Deltic in charge is quite a rare event and the locals had turned out in force to witness our coming. D9009 ran round the train here - an operation I suspected might take considerably longer than the booked 18 minutes booked, but in the event we were away only a little behind time.

Now coach A was the leading coach in the train things were considerably noisier for us and I was suddenly very happy with my decision to get up so early! Our onward route was towards Leeds, skirting round the avoiding curve - an experience which was not not possible on a DPS tour last year when we arrived only to find the curve had been lifted completely and was in the course of being re-laid.

Passing the Freightliner depot at Stourton 66522, 66503, 47150 & 47358 were seen. Bit of a stagger round through Castleford then the driver of "Alycidon" got the speed up a bit as we sped towards Milford Junction, Church Fenton and York. Staggering in (how unusual) meant we arrived 8 minutes late but there was still enough time to grab a photo or two before heading off.

The run north from York along the racing straight was superb - we soon hit the ton and kept on or around this figure most of the way towards Darlington. On the approaches to the station we were slowed by signals and a feather confirmed we were being routed through the station rather than via the avoiding line. A strange move considering we had a green through the platform but at least it gave the driver the chance to "open up" under the canopy - withering the waiting passengers in the process!

Our passage through Newcastle was interesting - a circuit past the long-closed Gateshead depot then over High Level Bridge. We weren't platformed but we did stop - just long enough to realise the class 142 alongside us on a Hexham service had already been given the road. As per usual - a late running all-shacks stopper was given priority!! We staggered out onto King Edward Bridge but, as expected, the nodding donkey overtook us and headed off in same direction as we were headed.

....By Hexham we were running approaching 10 late yet, even though we passed the 142 here, we continued to lose time. Arrival into Carlisle was at 13.39 against the booked 13.25 arrival time but at least we'd enjoyed quite a bit of thrash from "Alycidon". Plenty of time to photograph D9009 with the added interest of some shots in the company of 66524 and 90015. D9009 then headed off to Kingmoor for refuelling and run-round.

I spent the couple of hours at Carlisle photographing the comings and goings...and I even started to write this tour review!

All too soon and D9009 pulled back into platform 4 and we all boarded ready for the run south over the Settle & Carlisle (or "Stagger & Crawl" as mentioned by one of our nearby travelling companions). It was.....a stagger that is.

Then, as we approached Mallerstang the brakes went in hard and we stopped....and so had D9009's engines....

For about 20 minutes not much happened, except there were a few attempts to get both engines going again. The guard put out an announcement to say the news was that he had no news (!).

Eventually we were on the move again - the rumour going through the train was that a circuit breaker had tripped and that was the root cause of the problem. Now running around 40 minutes late the driver put in a lot of effort to catch back time and, by the time we approached the set-down point at Shipley, we were back to about 25 late. Despite this an announcement was made to say that the train would now not be routed via York so passengers for there would have to alight at Shipley and get home by public transport.

Hmmm, the change of plan would most likely mean we would now remain at the rear of the train for the rest of the journey. Not really on...so we relocated to a seating bay in coach H at the far end of the train to enjoy the thrash back to Preston. Various rumours circulated about what had happened to cause the change to our booked route - as and when I find out the actual reason(s) I'll update the Page accordingly.

Our diversion took us round the curve from Methley junction to Altofts junction rather than going via York with a reversal. This put us a bit over an hour ahead of booked time (I wonder...would this be "RST to the power of minus 1" or "inverse RST"?)

Manchester lived up to expectations - it was raining hard! Here we were held to take up a path exactly an hour early and we continued in this way to Preston and tour's end.

Another superb day - as per previous DPS tours, this one didn't go exactly to plan either, but it was still well worth the effort going on the tour. Highlights for me were the blast through Darlington station and the thrash through Standedge Tunnel - both sounding simply superb.

My booking is already in for the next DPS railtour which is on October 20th - is yours?

The following statement has come from the Deltic Preservation Society regarding Alycidon's performance and the missing out of the York stop;

For information, D9009's control circuit breaker tripped at Mallerstang on the S&C. The cause was quickly identified and rectified by the DPS Engineer, who travels with the loco. Once moving again, D9009 crested Ais Gill at 57 mph from a standing start.

The delay, unfortunately, was sufficient for representatives from The West Coast Railway Company Ltd (TOC for the day) to advise that the evening York stop be omitted to avoid the possibility of getting caught up in Railtrack Engineering Possessions.

The DPS would like to thank all those passengers affected for their understanding and, also, Arriva for getting everybody to York from Shipley.