Notes :
(1) Route taken at Silkstream Jn was from "down Hendon"to "down slow" (i.e. over flyover). 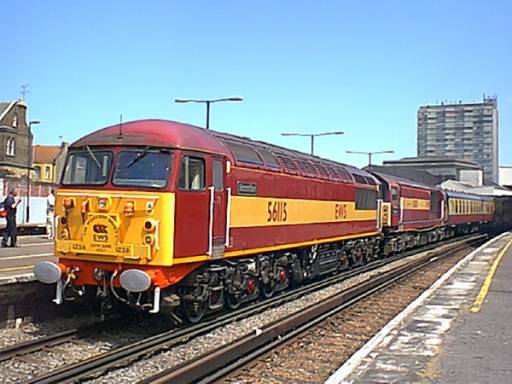 After last years 58 farewell, a Worksop tour was to have a 56 or two for this years tour.

In December, after a grid tour to Derby, rumours of Canterbury, Margate and Portsmouth were rumoured, and then in February the first booking forms appeared with Canterbury being destination but set downs at Margate and Ramsgate too.  Traction was going to be either 1x56 / 1x58, 1x56, or 2x56.  With the traction situation with 58s we were all expecting 56s.

On the 26th May tickets arrived for the tour, yes 5 weeks before the tour was due to run!!!  Due to an engineering block between Bickley Jct and Swanley Jct, Margate was now the destination and Canterbury and Ramsgate were the other calling points.  Soon after 56115 / 58037 were rumoured as the tour locos (both dud).  But the arrival of the tour to Worksop was to be 0001!!!!!

On Friday 29th June I saw a 56 sat in Doncaster looking superb with red buffer beams, grey/silver buffers and an immaculate new EWS livery.  All bits of the loco had been painted to make it look superb and was now named Bassetlaw!!!!  I thought that was 58037?? Anyway, this was to be a nice relaxing day to Margate with a 56/58.

Saturday morning came and another early morning departure from the house saw us arrive at Sheffield to see a couple miss the 06.24 HST to St Pancras.  Hmm.  43043 was sat on the 06.40 to St Pancras... At 06.46 an announcement was made that the next train at Platform 6 was the special charter service to Margate, and the grid came down the platform leading the tour with the 58 behind.  Both locos looked superb and with no “booked” track to be scored, so it was going to be a nice relaxing day ahead. We departed at 06.51 and headed South through Clay Cross, Alfreton and passed through Toton at 0726 with numerous 60's on shed.  We passed through Loughborough, Mountsorrel (with  GBRf 66 spotted) and passed Leicester TMD with two defunct 58's noted (046/005) together with 37109. Arrival at Leicester was 08.09, and things were going from good to bad.  There was a problem with missing members of the Crew.

The missing member of the crew arrived and we departed spiritedly at 08.44 sprinting down the Midland Main Line, a very similar route to what we took on the Southern Suburban in February with a pair of 31's.  The speed was impressive, and at Luton a crew change was taken and we set off on our merry way again...

By Silkstream Junction thoughts began to wonder if the flyover would be taken, but being on the fast lines meant the crossover again.  We headed round to Neasden where a 58 was seen, to Acton Wells Jct and round to New Kew Jct, Barnes and in to Clapham Junction for another pathing/op stop.  The booked timings shows the train via Denmark Hill and the Catford Loop, but after passing Stewarts Lane with 73101/47760 present, we passed through Wandsworth Road on the Chatham Reversible, and at Voltaire Road Jct went on to the Chatham Fast and passed through Brixton!!!!!  Hmm.  Woops!!!  Anyway, we came back on to booked at Shortlands Jct.

We headed down to Orpington, Sevenoaks, Tonbridge and by Paddock Wood we were only 8 late.  This is due to the fact that Railtrack had allocated 17 minutes to a 5 mile journey. The pathing stop at Cranmore was not required and we continued to Ashford, and arrived at Canterbury at 12.38 for the first set down stop.  Here I was to meet some of the Southern Contingent but one of them did not make it to the tour, did you Mr Bound??  We departed at 12.41 and found out that someone was stuck on the motorway working on the premise that the train would still be late!!!

Back to the tour, people alighted at Ramsgate (last griced for me on D9000) and arrived at Margate at 1312.

Welcome to the Costa Del Margate.

We met up with Daniel and his fiancée, wandered around the town before getting some chips before finding somewhere to sit and talk.  We went on a further walk around Margate, with certain places visible from the Only Fools and Horses Special to Margate......

The weather was pleasant, and after touring most of the town, we settled on a nice little pub where the beer was cold and someone was having a stag party...

At 16.52 the stock came back in to the platform with the 58 now leading, and our coach the 2nd coach from the front.  Let the noise begin!!!!! We departed at 16.56, picked up at Ramsgate, Canterbury and everything was looking good as we were held at Ashford and then pulled out for a further Eurostar set.

And then at Signal AD642 the train came to a sudden halt.  Rumours were that someone had pulled the emergency chord.  Well we departed at 18.06 and the train was then loped at Paddock Wood for the Eurostar, which we were allowed to pull out in front of at Ashford to pass. At Signal AD 164 (Tonbridge East Jct) on the UPL we were held again for a unit to come off the Hastings line.  We passed through Tonbridge at 1840 out to Sevenoaks, Shortlands Jct and did take the Catford Loop and at Crofton Road Jct we swapped from the Catford Lines to the Atlantic Lines.

The return routeing was as the outward, and so we passed through Wandsworth Road, Clapham Junction, Barnes, South Acton, Acton Wells Jct round West London to Brent Curve Jct.  At this point I would like to say that the 56 was very loud and was outdoing the 58.  Some people in our coach were getting excited over the prospect of seeing the London eye and St Pauls Cathedral (yawn).

We came off Brent Curve Jct and took the Down Hendon over the flyover (yep the flyover was scored!!!!) so no longer required, but the signal at Silkstream Jct was showing green, but we came to a grinding halt and the signal was put back to red. We then heard that a window in Coach K had been smashed by an object thrown by a selfish vandal who obviously thought it was fun.  And then the railway gets blamed when they trespass and get hurt.  The people in Coach K were evacuated and they all moved in to another coach.  With the coach evacuated, and a friend ready to disappear from St Albans the train departed at 20.54. A Stop was made at St Albans to allow medical treatment for a woman who had been sat in the bay where the window had shattered, and what I got told that was that the woman was asleep when the window went.

We departed St Albans at 21.32, had a Crew change at Luton (21.43-21.44) went from SL to FL at Leagrave Jct and went on our merry way to Leicester.  Various Engineers trains were seen up and down the Midland Main Line.  The conversations started to discuss route options but everything seemed to be OK.  We were 55 late approaching Leicester, went round to Derby, and approached Sheffield via Beighton and Woodburn Jct.  We arrived at Sheffield at 00.17 (59 late), left the train and meandered back to Scunthorpe.

Verdict:  Well the tour was very enjoyable, with the traction being excellent (and a big plus was how well they were both turned out by EWS), Margate was not too bad, but the return things went a bit pear shaped, but we all got home eventually.  So all in all, it was a really good day out, and hopefully look forward to next years tour!!

All distances, in miles, were provided by David Clark. No attempt has been made to verify the mileages given.