Notes :
(1) Tour was 30 mins late leaving Worcester FG due to AWS fault on the 50's, arrival in Penzance was between 15 and 30 min late. Train 20 minutes late leaving Penzance, reason unknown. Train got later during the latter part of the journey (Newport onwards), due to the driver over-shooting the platform several times, and not having a clear view of guards van (info from Guard himself). Arrive back at Worcester was around 30 late.
(20 Advertised timings showed the train reversing at Newport? 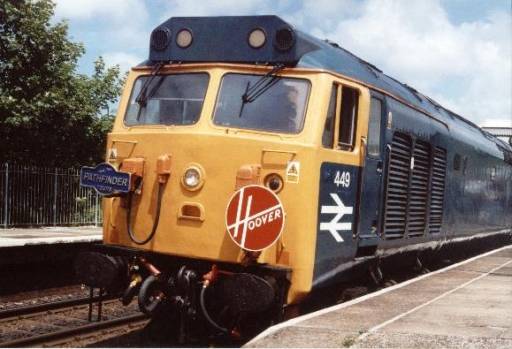 449 leading at the photo-stop held at St Erth on the inward leg of the journey.
(Photo : Alan Perryman)