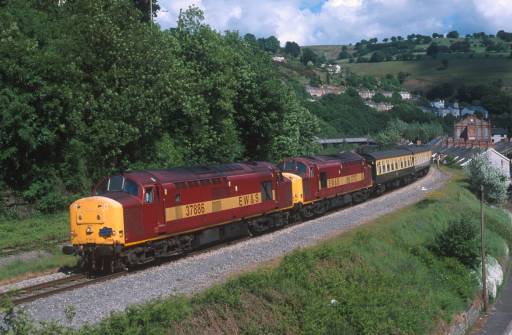 When first advertised this tour was not on my "to do" list - all dud track and a pair of preserved 37's didn't justify shelling out £45 for the tour plus cost of food and getting to/from it. Then, about 10 days before, the main branch to be covered - Onllywyn - was dropped owing to the track no longer being considered fit for passenger trains (hence the final tour name!). A change also to two EWS "heavyweight" 37's tempted me but the main destination now, Ebbw Vale, was also dud track so I still decided to flag the tour.

A call however on the Thursday evening confirmed that the train would cover all sides of the triangle at the south end of the Ebbw Vale line and by e-mail I found out the locos were likely to be 08993, 37707, 37886 & 60026 - three winners and a required curve!

So there I was, the approaches to 9am on Saturday morning and I was at Barnt Green to see 37707 & 37886 pull in - 886 being required whilst 707 was not (last had in its previous guise as 37001 back in 1986 on the Deltic Preservation Society "Silver Jubilee" railtour). Being pay-on-the-day it was pleasing to find the allocated coach was A, at the very rear. Why pleasing when it was 10 coaches away from the tractors? Well, A would be at the front leaving Ebbw Vale and all the way back to Crewe...and the 37's would be run round to this end at Newport, so front coach for the assault on The Lickey in the evening :-)

Any hopes of getting an empty seating bay was soon dispelled as the coach was already quite full, thus a little group of us who would have liked to be sat together became scattered through the train. The run south was nothing too exciting and, by Bristol Parkway I'd found my way to the beer tent in coach F to sample what was on offer. An empty seating bay was secured as far as Newport. Here there was a few minutes pause to hook 60026 on the rear - another big winner as it had never worked a passenger train before, one of the very few 60's left that hasn't.

Our route now took us direct to Cardiff then to Bridgend via Barry - again nothing much to mention of any real note. At Bridgend we momentarily joined the GWML before branching off again towards Tondu.

At Tondu we pulled past the station and junction and round onto the Pontycymer branch, stopping in the Garw Loop. We reversed here and 60026 then was in charge back the short distance to Tondu junction then onto the line towards Margam. A long stagger later an we were at Margam - loads of sheds being noted as we passed the depot. We halted just past Margam Abbey Works East junction where we were due (according to the pre-tour gen) to get 08993 - only we didn't - 08828 being the gronk chosen. This took us something less than a mile to Margam Yard junction where it as removed from atop 60026 and we then reversed and headed back towards Bridgend on the GWML.

We stayed on the GWML until Ebbw junction, just short of Newport. Here we took the curve which I needed onto the Ebbw Vale branch. With the prospect of some decent thrash a few of us decided to head up and invade the 1st class coaches. We were disappointed as there was actually very little decent thrash along the line to Ebbw Vale.

60026 returned us back down the branch - no need to power as the gradient was quite steep! As we approached Newport an announcement was made that owing to operating difficulties at the station, we were likely to pass right through on a non-platform road then reverse back in. This we did indeed do - we passed through on line 3 (up relief) to Maindee West junction here we reversed to gain access to platform 1.

In the hours fester here I wandered off in search of some hot food and found it in the shape of a hot-and-spicy pizza. It wasn't really that nice (which is about my opinion of what I saw of the centre of Newport!) but at least it was hot...and very spicy!

I arrived back onto platform 1 to find the tractors already run-round onto our end of the train. A much louder journey home was in prospect! All windows open in coach A and a reasonable run was had back westwards and then north. We simply stormed up The Lickey - load 10 didn't knock off very much speed and we topped the summit at around 40+mph - but the ascent was still very noisy :-)

As I walked over the footbridge 37707 & 37889 made a very loud departure as they headed on their way back towards Crewe and the end of a pleasant day out.