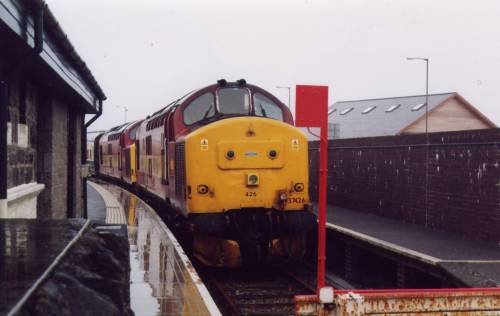 Sources : John Clifford (from "contemporary sources")
& Robert Frise (on the train throughout)

After an early start we caught the Thames Link from Leagrave to Kings Cross (TL) and made our way across London to Paddington where we met up with the usual regulars that make up the "Coach B Club" (As we refer to ourselves) One of the pleasing features of HRT is that regular passengers are seated together and have therefore become friends. The tour becomes a social event. There was an opportunity to inspect the new Class 332 units on the adjacent platform. After a smart departure the Great British Breakfast was enjoyed followed by a light lunch. At the pick up stop at Reading, a brand new Virgin Voyager 220001 was observed in the bay platform and 220016 in the yards.

On arrival at Totnes we left the train and joined the South Devon Railway's train to Buckfastleigh. The train formation was 2-8-0 No 3205 1295+4962+4805+6515+7377+W228W+W225W At Buckfastleigh vintage buses were on hand to ferry passengers to Buckfast Abbey Upon rejoining the charter at Totnes a superb dinner of roast chicken was enjoyed on route to Bristol At Bristol busses were on hand to take the passengers to the Marriott Hotel. Unfortunately they got the wrong Marriott hotel so it was back on the busses again. A pleasant stroll around the waterfront rounded off the day.

Another early start and we rejoined the train for Breakfast and the run up to Shrewsbury. Here two options were available, a coach trip to Blists Hill or a trip to the Welshpool & Llanfair Railway. No contest. On arrival at Llanfair a special had been laid on which was double headed by 14 & 822 Earl. The workshops and sheds were open for inspection. On rejoining the train at Shrewsbury dinner was enjoyed during the run up to Glasgow Central. Coaches then ferried the passengers to the Erskine Bridge Hotel for a session in the bar with the regulars.

After crossing the Clyde by the Erskine Bridge the following morning the train was rejoined at Dumbarton Central for the run up the West Highland to Fort William. Here you could either leave the train for a coach trip and cable car up Aonach Mor or remain on board for a run to Mallaig and a light lunch. Again no contest. The break at Mallaig was spent in heavy rain.

On arrival back at Fort William we collected the rest of the passengers.

An enjoyable dinner of roast lamb was had whilst passing through the snow flurries on Rannoch Moor, followed by another late night session in the Hotel Bar.

Monday came all to quickly as we boarded the waiting coaches for Glasgow Central.

A hurried breakfast was enjoined on route to Edinburgh where once again there was a choice of options. The Royal Yatch Britannia or the Bo'ness & Kinneil Railway.

The SRPS had specially steamed a locomotive for our party, and on arrival at Bo'ness a return run was made to Brirkhill. The trains formation was 65243 Maude 4422+unidentified BSK+1859 Back on the coaches to Edinburgh for a swift run down the ECML arriving at Stevenage half an hour early. We left the train here.