This was originally advertised as leaving Victoria at 0730 & getting back mid-evening. When the ticket arrived it was a 0655 departure & back not mid evening but midnight (almost), actually 2350. I had booked on it as I had never had 47 haulage between Streatham Junction & Wimbledon nor between Cowley Bridge Junction & Meldon Quarry.

Anyway this meant leaving my home station of Hatfield on the first train at 0502 and left Kings Cross on the 0011 which I caught only because it left late. The 0011 terminated at New Barnet with a bus connection onward arriving at Hatfield at about 0130. Now, I know this is not long compared with trips undertaken by some people but as I will soon qualify for a Senior Citizen's Railcard I haven't got the stamina I had in my twenties.

If you think this is a long moan, you'd be right. I feel I've been around long enough to give an opinion.

Back to the trip which ran well and we got back to Victoria 4 minutes early. However I was seated in the front coach with a couple and their uncle who had persuaded them to come along. The coach contained a number of 47 bashers and I have no objection to them, per se, but there was one long-haired individual who seemed to have consumed too much alcohol and who could speak only in a loud voice. About every forth word started with f.... (it wasn't forty seven). Also despite the stewards collecting rubbish regularly, he threw his rubbish out of the window.

The 3 others seated in my bay said that they would not be going on any more Cheshire tours and, so far, I haven't either. 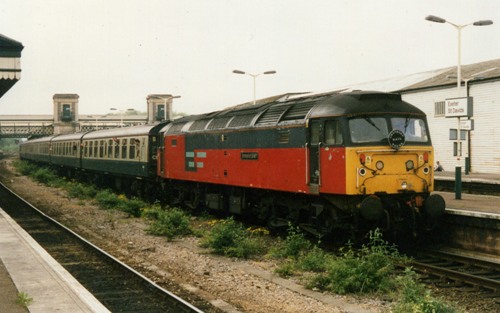 Timings (Actual with some booked)
(from John Clifford)