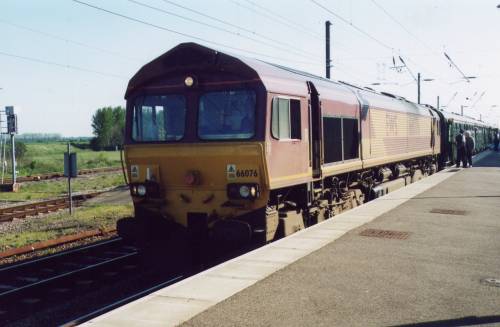 As it was very close to my wife's birthday and our wedding anniversay, we decided to splash out and travel first class. So on a sunny morning we left High Wycombe at 0740 to drive to Potters Bar to pick the train up. After an uneventful ride via M40 and M25, we arrived at Potters Bar at 0830. At about 0845 the CCTV screen on platform 3 (the fast line) indicated the next train would be for Newcastle! After 5 minutes it changed to Wisbech and Ely. So at 0858, 66250 (with 66076 at rear) arrived via the slow line at platform 4.

What appeared on paper to be an easy run of 30 minutes for the 15 miles to Stevenage actually took 31 minutes as we crawled along the slow line. Still losing time arrival at Peterborough was 12 minutes late. 1 PW train with class 66 was passed on the way-one of only 3 diesels locos seen on the day. A further delay took place at Peterborough whilst it was decided where to place the train in the platform in relation to the signals. With 66076 in charge, departure was 27 minutes down and staying that way as we took 23 minutes to cover almost 15 miles to March West Junction where we took the virtually closed line to Wisbech.

With 3 train crew operated crossings on the 7 mile route, progress was slow taking over 1 hour to get to Wisbech. Some time was spent deciding how far we could go eventually the front of the train just getting over the Weasenham Lane crossing before immediately reversing so as to clear the crossing. Another wait eschewed with the sun blazing into the train (although the curtains in first class made it bearable). After spending a few minutes at Wisbech we returned down the line to Whitemoor Junction. There, we travelled a new bit of track probably a first for passengers and probably the train crew. The East Curve that used to run round the back of platform 2 at March before joining up to the Ely line had been removed, and had been replaced by a new curve that joined the main line before platform 2.

The fastest part of the journey so far (averaging 60mph) got us to Ely 19 minutes early, which gave us 3 1/2 hours to explore Ely. In the sidings at Ely was 60074 that had worked in earlier on the Freightliner Phoenix. After a stroll by the river and a look round the town we got back to the station and watched the comings and goings by diesel unit classes 156, 158 and 170 and the arrival back (again from the Freightliner Phoenix) of 58045. This proceeded to the sidings, joined up with 60074 and they both left in the Peterborough direction. At 1700 our train arrived and 15 minutes later 66250 took us back up the line but this time to Kings Lynn.

To get on the Middleton Towers branch, we were sent through Kings Lynn Yard towards Kings Lynn Docks almost reaching John Kennedy Road. Reversal took place and Middleton Towers was reached but stopping short of the bunker. (I seem to recall an earlier trip with 2 Class 31's when we went further and allowed to get off the train - 30th September 1989 - "The Fenland Phoenix", also Hertfordshire Railtours, 31134 & 31174. I was on it too! Gary).

We then returned to Kings Lynn, reversed and with 66076 in charge went back to Ely (where there was a crew change) then continued back to London via Cambridge with arrival at Potters Bar 5 minutes down.