When Pathfinder announced that they were running a Tour from Crewe to Cleethorpes via Kings Cross with a DPS Deltic I quickly booked the tour for the January 13th but due to Gauge Corner Cracking this tour was postponed to April 28th. I originally booked on the tour from Crewe, but due to recent events I’ll not get up at ridiculous times unless I have to. So I decided to get on at Doncaster.

With the tour being on this particular weekend, there was the North Yorkshire Moors Diesel Gala with 55019, and the Severn Valley Railway diesel gala. So, people had too many choices. Oh, there was also the Goth weekend in Whitby. So plenty of choices, and as a result the tour was not exactly a successful sell out. As a result EWS staff were able to travel on the tour in first class for free. Some people at work could not believe that I had paid to travel on the tour. I pay to make sure that these tours run, and so the locos are able to be used again, for which some people did not understand.

Anyway rant over. The traction had changed to D9000 due to the fact that the contract for 55019 was not acceptable. The timings were back, and 3 hours were allocated to Kings Cross from Doncaster with pathing stops at Retford and Claypole Loop. The Return was from Kings Cross to Crewe via Cleethorpes. 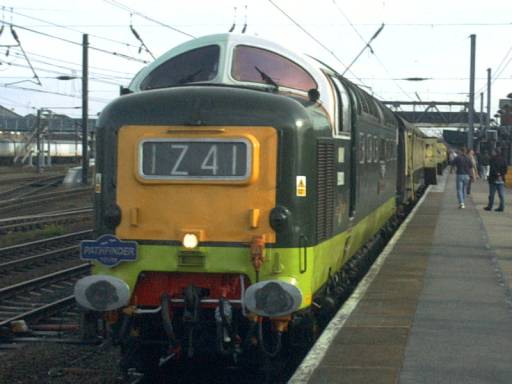 We departed Doncaster at 0811 and after Hexthorpe Bridge smoke erupted out of the Deltic. My Lords!!!!!!!

A GNER Leeds to London service passed us on the Up Fast, and we were routed on to the Up Slow. Doncaster Carr, RMT were passed as we picked up speed, and arrived at Retford at 0830. The GNER service passed, and we set off again 7 early and picked up speed…..And a pathing stop at Claypole was not required and so we continued………..

By Grantham we were 18 early, Peterborough 40 early due to us having 14 minutes engineering time. 66705 was seen at Peterborough yard, as well as various units. The centre road was graced as we continued our quest South. At this point Railtrack had looped a 365 on a stopped to Kings Cross. And we just carried on, and on, and on……….. By Hitchin we were 44 early, and finally arrived at Kings Cross at 1027 (45 early!!!!). Pathfinder, with tongue in cheek, decided to apologise for the early running!!!!!!

So with 3 ½ hours to spare, various options were considered. To go to Camden shopping, the Head of Steam at Euston, but instead we walked down to Leicester Square via Theatreland with Mr Bound for a lovely and full lunch.

The stock came in to Kings Cross with 90026 at 1350, and we departed at 1404 with our coach now near the front. For which windows were opened for some smoke out of Gasworks Tunnel. We were informed that we needed to be 30 early in to Cleethorpes due to the route opening hours on the Brigg Line.

We departed, and once inside Gasworks Tunnel, white fumes were smelt in the coach…… Now someone had requested one of the windows to be shut. However, pressure saw that turned down. And D9000 stormed through North London until a TSR at Alexandera Palace where 3003 / 3004 were seen.

As a result Potters Bar was 6 late, but a storming run to Peterborough saw us turn the heads on the station platforms with the superb traction at the helm. We stormed away, and by Newark we moved across on to the platform which would take us round to Lincoln line the scene of the ECML drags of August. By Newark Crossing East Jct we were 17 early again, due to some engineering allowance not used.

We picked up speed and approached West Holmes Jct 18 early. We approached the lovely city of Lincoln, with the university spreading across the left and right for whose famous graduates included me!!!!!! Much studying was evident as no-one was looking, and we crawled over East Holmes and High Street Crossings, annoying the locals in the process.

We arrived at 1608 and departed at 1611, after exchanging drivers and headed towards Cleethorpes, the first time a deltic had gone to the resort for 20 years. The line To Wrawby Jct was my old starring ground for when I was at uni, and it’s a pretty good line for speeds. Due to the slack in the schedules we past Barnety at 1640 (45 early) passing the ludicrous new footbridge. On passing Brocklesby 60078 was seen coming off the triangle to assist us from Cleethorpes to Ulceby.

At Grimsby we were held and the local brats came out to see a proper train. The hum was evident all the way passing Grimsby Docks, passing New Clee, Blundell Park (yuk) and arrived at Cleethorpes at 1717.

WELCOME TO THE COSTA DEL CLEETHORPES.

And guess what, it started to rain. And it rained……. The Trans Pennine Express was delayed (typical) and this delaying the arrival of 60078. The rain stopped and we were due to depart at 1745, but we awaited a further 158 from Manchester Airport.

By 1800, 60078 glided the train out of Cleethorpes. Not the first time a 60 has hauled a charter train out of Cleethorpes. We passed through Grimsby Town (again) and arrived at Ulceby at 1836 and departed at 1841 with the Napier At the helm. With time ticking away, we passed 60003 with some Iron Ore Hoppers which had come from South Wales. Are we to see 3x37 or 2x56 on these trains then??? (I would prefer the latter).

We passed Wraby Jct at 1854 and headed down the line to Gainsborough Central. Now there were two people who required the branch. Its been done by me on 114s, 153s and a 47. At Gainsborough we took the line to Doncaster, another line which has been done on a previous Deltic tour (05/12/81 the Hadrian Flyer with 55015).

The journey to Doncaster was slow, and boring, but the banter was plentiful, as it had been all throughout the day. With numerous banter about NYMR, Whitby and SVR as well as the banter getting personal about yours truly!!!!!!

We passed Bessacarr Jct at 1953 and came over the flyover, in to down Decoy and arrived at Doncaster at 2001 (33 early).

We alighted and gathered around the Green God, while on Platform 4 at GNER HST turned up, and I think the Deltic driver wanted to show the HST what was missing from the East Coast Main Line. At 2007 both the Deltic and HST departed northwards from Doncaster, for which must have been the best photo that anyone could get from the North Bridge. HELLFIRE!!!!!!

Back to normality prevailed and we boarded out 150228 to Scunthorpe (the same unit took me through the Perth Carriage Wash). We arrived back home at 9pm to find Everton beaten Bradford, Yorkshire beaten Kent and Scunthorpe United seasons over!!!!!!!

On reflection, it was a really good, well organised and an excellent performance from D9000, EWS and all parties concerned for which Railtrack must take some credit for the clear run from Retford to Kings Cross and Kings Cross to Cleethorpes.