Source : Daniel Bound (on the train throughout)

The prospect of 2 branchlines and with some other interesting twists and turns on the way, the High Peak was for me, a very exciting prospect. An 8:30 departure from Kings Cross, meant an earlier than normal alarm call at 7 o’clock. A walk down to Southfields tube and a very slow district line train into Victoria, for a faster Victoria line tube to Kings Cross.

On arrival 47726 was waiting at the buffers on platform 1 with the southern liveried coaches of our railtour.  47787 was the thunderbird loco sitting next to 90016 on the head of our tour.  After taking some photos in the glorious late spring sunlight I boarded the coach, took my seat and awaited departure. 90016 departed on time and we set off through Gasworks tunnel, crossing onto the down fast at Belle Isle.  To say that the 90 was impressive, would be wrong. It was a very tedious journey northbound; we had to stay behind the Leeds stopping train due to our extended platform time at Retford. So despite being mostly on the fast lines we never really got a good run going, slowing down at Alexandra Palace (passing 31452 and 150237 at Hornsey) and then coming to a complete stop just before Welwyn South Tunnel.  This completely blocked the northbound ECML and giving most on board a small cardiac arrest!  All this slow running meant that we were constantly losing time.  We were 4 minutes down at Potters Bar, 9 minutes down at Stevenage and 11 minutes down on arrival at Peterborough.  Some of this slow running was due to us switching between the slow and fast lines to let service trains pass. We ran fast all the way to Woolmer green junction then onto the slow for the 4 miles to Stevenage, then back onto the fast until just before St Neots where we crossed onto the slow all the way to Holme Junction for the run into platform 5 at Peterborough.

Departure from Peterborough saw us take the down slow/down Stamford line to Helpston Junction (bad memories exist here see my review of the Grassington Dickensian excursion!) where we crossed over onto the down slow, all the way to Stoke summit!  Locos were 08539 in Peterborough station with 58041, 66184, 66046 and 56055 on the stabling point.  A very interesting MGR was stabled in the West Yard at Peterborough with 47635 on the front! 66705 and 706 were outside the GBRf shed, with 08516 also stabling nearby.  We finally picked up some speed on our run towards Retford station.  Whilst waiting for 90016 to come off our train, 66505 passed through on 4L85.  Much clanking and banging signalled the end of the 90 and it trundled off north then 66084 came around the curve and attached itself to our train.

Such a slow change meant we departed Retford 31 minutes down, but things would only get worse! 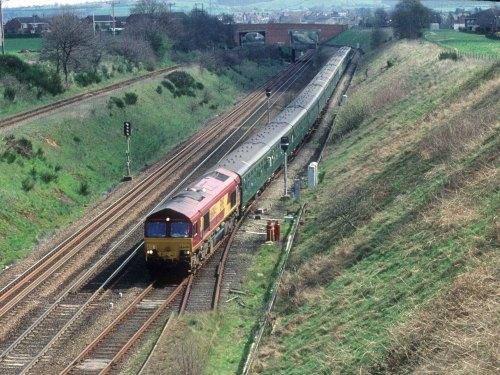 Vandals had cut some cables so we were hand signalled through the section from Down Thrumpton west until just after Mansfield Road crossing.  The maintenance contractors had even blocked off 2 crossings (Rushey Sdgs and Mansfield Road).  Passing Worksop 45 minutes down saw 66026, 205, 228 and 233 with 56 025, 071, 112 and 115 stabled around the depot and sidings.  Approaching Sheffield we passed the tram depot with nos, 119, 123 and 124 visible before a slow run through platform 6 saw us turn right onto the Hope Valley line past Dore station. 170638 and 519 were seen at Sheffield.  66525 was the only excitement on the line seen at Earle’s sidings.  We then took the first branch line of the day, diverting left at Chinley East Jn onto the Buxton branch.  60035 and 60036 headed towards Manchester on the north side of the triangle.  Passing by Peak Forest saw 66159 in the sidings. Here we received the token and headed onto the single line section through the massive quarries at Tunstead, and through the beautiful scenery to Buxton up relief sidings line ‘Z’, as ‘X’ and ‘Y’ are "oou" and the point has been taken out!  Here 66220 was waiting to go onto the train to take us on the second branchline toward Hindlow quarry.

Once 66220 had been attached we reversed passed Buxton signal box and crossed the very impressive Spring Gardens viaduct.  In this post-Hatfield railway Railtrack officials are very wary when passenger trains pass over freight only track, but did Railtrack really have to set a 10mph-blanket speed restriction and 5mph speed limits over viaducts on this branchline?  At least you could get some really nice photographs and video footage!  The stumble up this very picturesque line took us almost 45minutes to do this 4 mile branch.  We didn’t quite reach the end, 66220 stopping at the second point at Hindlow quarry, only about 20 chains short of the end.  After the reversal we started our decent into Buxton, now about 80 minutes down. Talk on the train was of just turning around and missing out the stop at Buxton, but the buffet car needed water so we had an hour or so in Buxton with a revised departure time of 17:00.

Only after coming off the Hindlow line were we told that the tour was very close to being cancelled, with Railtrack refusing us to run on the line. Fortunately common sense prevailed with some sharp talking by the Hertfordshire officials ‘winning’ the day, congratulations to all concerned. 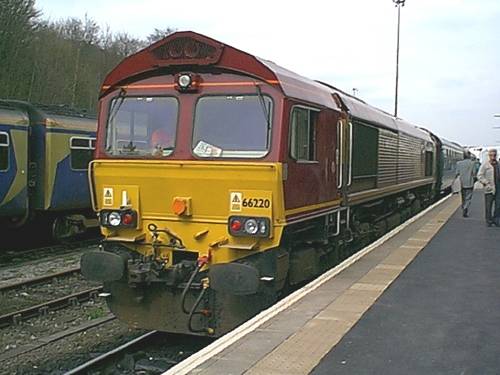 After visiting the local bakery and having a short wander around, I made my way back to the station to view our train coming back in.  At 17:00 we left and made our way back to the relief sidings, here we lost 66084 and set off back on the Buxton branch.  66174 was the only addition at Peak Forest and after giving back the token we proceded back towards Chinley Junction.  After passing 60035 and 036 on a ballast train returning from Manchester we waited for our path towards Sheffield.  We waited 15minutes for our path, watching 4 service trains pass before slowly heading off for Sheffield.

Here we deviated from this mornings route and we continued on the main line towards Meadowhall now only 40 minutes down!  We stayed on the down main until Swinton Jn North where we turned right toward Doncaster, and at Hexborough Goods Junction we again went right on the freight lines towards Bridge Jct.   Here we travelled on the down/up west slow 1, then entered the Royal Mail Terminal, where we lost our 66 in favour of 90016 again.  Locos present were 66133, 219, 223, and 244, 60086 and 56068 with 08763 and 587.   We left the RMT and went over the down Lincoln flyover, onto the up Loversall Curve and joined the ECML at Loversall Carr Jct for the long haul back to Kings Cross.

We stayed on the up main until Stoke Jn, where we were routed onto the up slow for the 23 mile run into platform 1 at Peterborough, 66013 was new since the morning.  We left Peterborough on the up slow as 66121 passed us in the darkness and joined the up main at Fletton Junction, only to rejoin the slow lines at Huntingdon north junction.  After a GNER service had passed us we again crossed onto the fast lines (do you think the signalman was bored?) at Cadwell Junction as we slowed for our second stop at Stevenage; now only 45 minutes down.  The run back into Kings Cross was very fast, and possibly the running of the day!  We reached platform 1 at Kings Cross only 40 minutes late, quite a remarkable feat from earlier in the day.

Overall another very good Hertfordshire tour, with most of the late running out of their control, some stunning scenery and lovely weather. There is no better way to spend a Saturday!