Notes :
The circular tour with the 73's was available as a separate tour ("The Urban Suburban") for passengers wishing to join in London.

(1) Train was advertised to cover "the link from Silkstream Jn to Brent Curve Jn" but did not do it on the day, traversing the Hendon Chord instead.

The day of the tour came and a very early departure saw us get to Sheffield for 05.20.  The tour stock was sat in platform 8 with 31459 and 31602 sat on the stock humming away (humming? Isn't that what Deltics do....not 31's....Gary).  We departed at 0556 and picked up at Chesterfield, and were ready on time at Derby, but due to the catering car water tank needing to be filled with water we departed 10 late.

The route in to Birmingham was the normal route vice the fact at Landor Street Jct we headed down the Camp Hill Route before taking the Lifford Curve in to Birmingham.  Gronks 08765 and 08884 was sat in the Birmingham area. We arrived in Birmingham New Street and picked up many passengers, and departed New Street 2 late and again passed Washwood Heath Yard on our way to Nuneaton, and Leicester, but at Glen Parva Jct headed down to Wigston Sth Jct and this scoring my first bit of track.

Now I remember 31's from their days on Cleethorpes to Manchester Piccadilly and Liverpool Lime Street but never had any haulage records to speak of.  But I do remember their nippy performances on the 1545 Liverpool Lime Street to Cleethorpes.  They opened up once on the Midland Main Line before having an operational stop at Kettering.  People stretched their legs and took photos, and a Midland Main Line HST set passed the station.  Now, I love to hear locos making noise, and the 31s from now on, provided plenty of it!!! 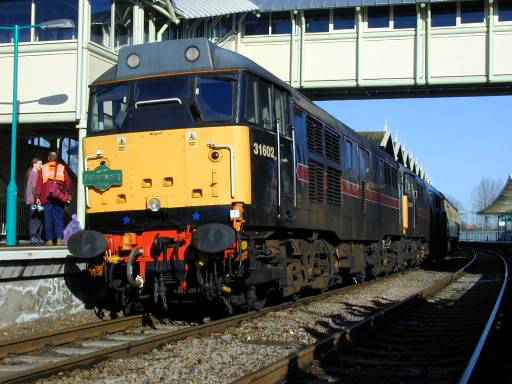 New track was scored at Sharnbrook Jct by taking the slow lines down to Bedford.  HST’s passed on the Fast Lines as numerous bellowing was to be had by the Cranks in Coach A.  Once at Bedford the locos were opened up and the 30 miles to St Albans were covered in 25 minutes.  At Silkstream Jct, the flyover was supposed to have been traversed, but we used the chord off the fast lines to the freight line to Brent Curve Jct at Hendon.  Some people required the flyover and not the flat chord (tell me about it - I lost out on the only piece of track I was due to score on the day and, no, I didn't need the Hendon Chord! - Gary).  But in the end it was down to Railtrack who set out the route.  New track was had on this route all the way down to Acton Wells Jct.  It was the slowest we had been for a while.  I’ll have to mention at this point the atmosphere in our coach which was very good.  Quite a few of us had been on the Southampton Docker, and were talking about 73109 “Battle of Britain” quite a bit.

At New Kew Jct we were held for a 8-car 455 unit.  We passed through Clapham Junction (for the first in 5 times today) and headed underneath to Longhedge Jct, Battersea Reversible and were sat outside Victoria for our slot in to Victoria.  We finally arrived at Victoria at 1217 and did a lunch time move.  Platform 2 graced us, which was surprisingly the last platform I had in Victoria two weeks ago.  Now what was that loco again????  Now where is that taxi to Cockfosters??? 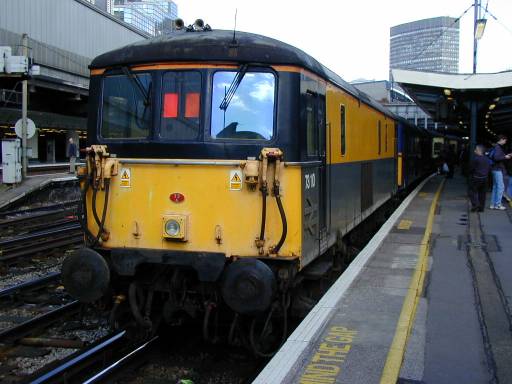 Now for those who was on the Southampton Docker will remember Wimbledon (well the name anyway) as the Power Box that decided to hold a barbecue.  Anyway we had 73109 and 73108 on diesel power / electric power that day!!!  So, we passed through Wimbledon, New Malden round to Twickenham, and back to Clapham Jct where we were held (and a number of people alighted).  Again we departed up and under and out to Factory Jct, Denmark Hill and at Crofton Road Jct we crossed from the Altantics to the Catford Lines.  There were lighting problems in our coach and after Nunhead and Lewisham we took the line to Charlton passing through Blackheath Tunnel in total darkness.  This was the 2nd circle, and we headed out to Slade Green, and returning via Eltham and Blackheath.   After Lewisham, we headed out to Nunhead and Crofton Road Jct, but the ED’s were on diesel power!!!!! HELLFIRE!!!  It brought back memories of the previous ED tour we had along the Great Western Main Line.  At Factory Jct we headed out to CJ, Balham, Streatham Hill and round the Leigham Curve, which is rare passenger track, but I didn’t require it after doing the 1550 Streatham Hill to London Bridge train.   We got stopped in Brixton, and departed unscathed!!!  The return to Victoria was via Voltaire Road and in to Victoria at 1621.  However, 73101 was sat at Stewarts Lane after working the VSOE the previous day.

The PEDs were sat near Stewarts Lane, and they followed us in to Victoria.

The departure from Victoria came at 1640 and the return journey was no less interesting than the inward journey.

The 31s stormed up the bank out of Victoria and again we went up and under out to Latchmere Jct, the West London Line, the Chelsea area, passing 73118/73130 at North Pole and touching the West Coast Main Line before heading past Willesden SW Sidings down to Acton Wells Jct.  Again this was track covered in the return leg of the Southampton Docker with those two ED’s.

We awaited a path on to the Great Western Main Line and took the slow lines past Acton Yard where quite a few 66s were seen behind all the wagons from the Foster Yeoman service.  We were to return via the Chiltern lines up to Birmingham.

We came off the Main Line at West Ealing and headed up to Greenford, before taking a bit of track away from the station on to the line from Paddington to West Ruislip.  The run up to Princess Risborough was good with the Acton driver thrashing the PEDS to their limit.  We were 40 minutes up by Aynho Jct and at Banbury a Saltley Man replaced the Acton man.  The centre road was had at Leamington Spa, before a stagecoach bus depot was seen (causing ecstatic behaviour from the resident Coach B bus crank!!!!  He was put down shortly after) 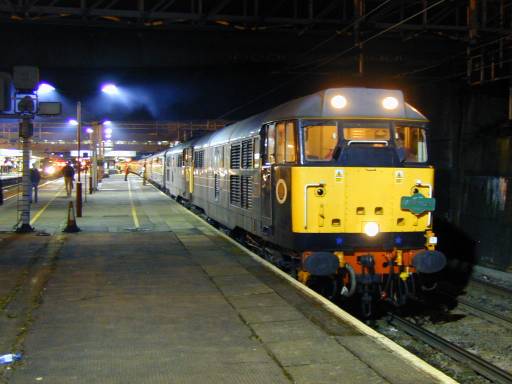 The drop off at Coventry still mean we had a +26 and headed in to Birmingham via Stechford and Perry Barr.  At Soho Sth Jct it was clear that there were blizzard conditions outside, and we all thought that the further north the worse it would get.

Anyway, we departed Sheffield and got home before midnight.  Overall, the tour was thoroughly enjoyable with a varied route to / from Sheffield and in London.  The locos (31's and 73's) performed impeccably, and the organisation of the tour was really good.  The timings were good too.  So a big credit need to go to all parties involved in the tour.  And this time at Wimbledon, there was no need for BOB to fix it!