Notes :
(1) 56117 used as barrier vehicle between 92 and stock.
(2) 56117 on rear.
(3) A second (different) class 92 was scheduled and advertised by Pathfinder. 92022 was booked to work the train but was failed at Bescot. Replacement 92015 was also failed, leaving only 92009 to work the train. 56117 as used as barrier vehicle between the class 92 and stock .
(4) Train diverted from booked route (reverse of outward) due to rail defect at south end of Gloucester Yard. Bristol Parkway passengers eventually returned home on a Virgin Cross-Country HST which was allowed over the defect at 5mph. This information provided by Trevor Cockram who was a passenger to Bristol Parkway.

I awoke on this day to find a thick fog had descended overnight and it was well frosty too (glad then that I was not having to scrape ice off the car to get anywhere!). My chosen joining point for Pathfinders first "spinner" of the year was Birmingham International. I arrived with some time to spare and quickly established the Friday night "gen" I had still seemed to be accurate : 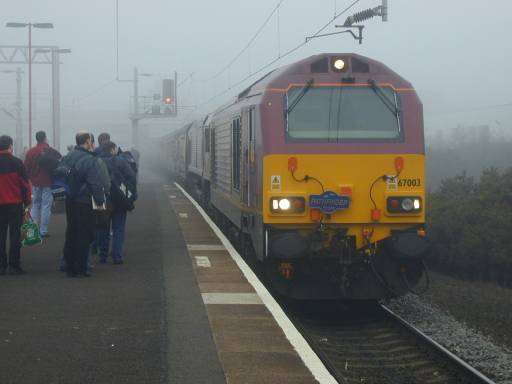 Once aboard a rumour was quickly picked up that it was possible that the pairing might get changed in the day - 67001 was reported at Saltley and apparently "control" were aware that 66135 was "dud" having produced on a previous Pathfinder trip. 66034 had indeed been rostered but a reported problem getting it to "multi" with 67003 had forced the change.

A relatively short spin with the GM's took us through Coventry to Rugby. Minor panic when we rolled in to see 92032 in the north end bay - another "dud" one for many (including me). Thankfully this was not our 92 and shortly afterwards 92009 "Elgar" and 56117 duly appeared and hooked on to the back of the train (the "grid" between the 92 and stock).

Off we set now via the Trent Valley line in the direction of Crewe. As we pulled out I was rather upset to see an EWS liveried 86 heading south on a Virgin Trains service - it was 86401 - one of my last eight 86's I need for haulage to clear the class and a rare beast indeed to find on a service passenger train!!

We stopped prior to Salop Goods Loop Junction where the 92 was removed before we continued on our way with 56117. Amazingly we left from the loco change a whopping 38 minutes early (yes - that's right I did say EARLY!). We regained the West Coast Main Line via the "Down Liverpool Independent" line, thus we went through Crewe without actually going through the station. A quick thrash up the WCML got us to the Warrington area at which point we turned off and took the freight line towards Latchford. In the process we passed 60035 "Florence Nightingale", our next loco. A good choice as it was another true "virgin" of the class, being one of only a very few of the fleet left that are reported never to have hauled a passenger train during its career.

60035 duly performed and took us from Latchford to Liverpool Lime Street via Fiddlers Ferry and Ditton. An hours layover was used by many at Liverpool to seek refreshment - of the solid as well as liquid variety! No chance to doss on the stock as it was removed to Edge Hill for servicing. During the break I had a call from a colleague who was heading for Liverpool on a service train as he required 56117 for haulage. He knew he had a tight connection (4 minutes and the train he was on was late) so he was calling to see which platform we were in. About 20 minutes prior to departure our train reappeared into the same platform (8) and then 60035 was unhooked as it was no longer required. 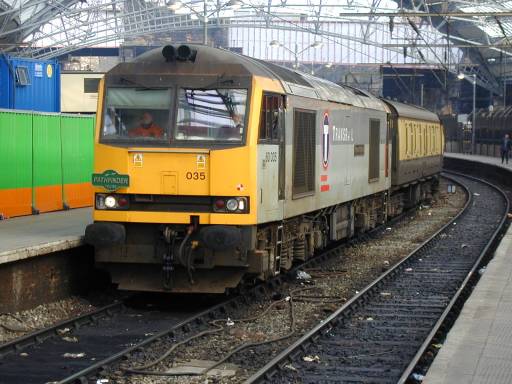 60035 brings the stock back into Lime Street station. Not the use of a different coloured headboard to that on 67003 earlier.

We departed bang on time (if not a fraction early) - much to the annoyance of my colleague who we passed about two minutes out of Lime Street station! So close Denzil, but not close enough.....

I was in the front coach for the climb out of Lime Street and it was worth it with grid 117 working hard to Edge Hill. Our route homeward was via Manchester and Stockport. 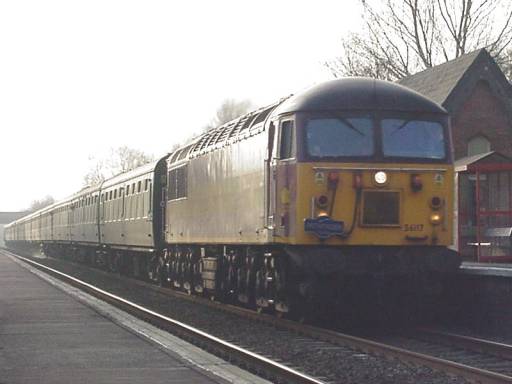 Crewe station was again avoided by using the Up Manchester Independent to Basford Hall Yard. We exited the yard on the Up Independent, sighting 66604 as we did so. A stagger to Stafford ensued and here we all baled to see what the new 92 was.....

With "Elgar" coupled up to 56117 we set off again towards Birmingham International. En route we were told that 92022 had been the booked loco but a fitter had failed it at Bescot before it had left for Stafford. The replacement was 92015 but this too was failed, only leaving 92009 to haul the train. I personally would rather we had not bothered with it and gained some extra grid mileage. I'm sure many more on the train would have agreed. Whilst I don't doubt the explanation given as to why we got the same 92 back, it does seem strange to me that the advance gen I received only had 92009 mentioned and not another one....

Back at International an a short wait saw 67003 & 66135 reappear to take over from 92009 - so we were bowled there for any more different engines, despite the morning rumour. At least it saved me having to remain on the train to New Street and ching out for a single ticket back. I stayed to watch the train depart before heading off home myself. 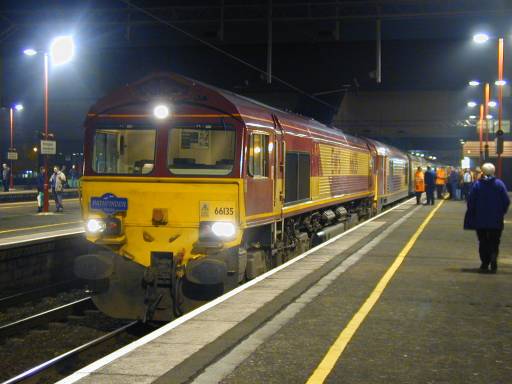 66135 & 67003 prepare for departure at a cold and frosty Birmingham International. Back to the blue headboard!

A reasonable day out but a little disappointing to have missed out on the two potential new haulages (the 66 and second 92).