Notes :
(1) Original tour route was to have included triangle at Castleton and Heywood but this was dropped due to engineering works on the Heywood branch and the run over the Pennines was substituted instead. A landslide at Kenyon cutting a few days before the tour further changed the route - from Crewe the train was due to go via Warrington Bank Quay, Newton-le-Willows, Eccles, Manchester Victoria and Ashton-under-Lyne to Stalybridge. In the event the direct route via Stockport, Denton and Guide Bridge was taken. In order to get passengers to/from the centre of Manchester a DMU shuttle was used, employing two class 101 units! The train between Cardiff and Manchester (and reverse) also ran under the name "The Manchester Excursion" as it was used to convey passengers to Manchester for a days sightseeing.
(2) 60050 on rear.
(3) 56111 on rear.
(4) believed to be the first time ever 60050 had hauled a loaded passenger train (service or railtour). 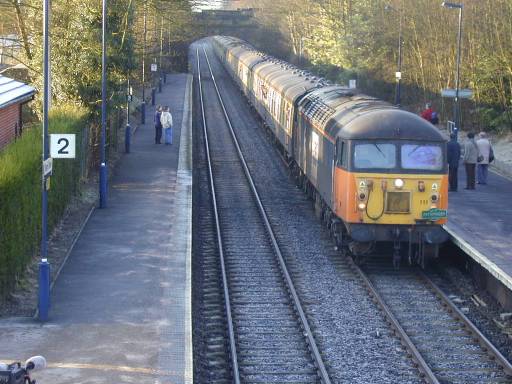 56111 pulls into Barnt Green on the outward leg of the tour.

How much would you pay to travel over about 1.5 miles of required tack? That was the decision I had when booking on this tour. Originally advertised to cover the Heywood, Weaste and Bredbury branches, the first didn't survive owing to engineering works. Weaste is only about 5/8 mile and, depending on which of the two lines at Bredbury were traversed, that branch was about the same.

All in all though, the prospect of a good few miles of "grid" haulage and a £10 discount voucher (from "The Power Porter") swayed me to book on this trip so I happily (!) parted with £35. Gen in the days prior gave 56111 as the main motive power - good, required. The class 60 "assisting engine" gen changed but still kept coming up with winners so I was happy.

A cold frosty morning saw me at Barnt Green with plenty of time to spare so there was ample opportunity to chat to some other friends who had also arrived early. Yes, 56111 was on the train and it was on-time leaving Cheltenham Spa. A while before it arrived and we could clearly hear the grid attacking The Lickey (one disappointment of joining here as that I missed the ascent of The Lickey, but the day would have become very much longer had I gone to Cheltenham to join). 56111 was photographed arriving and we piled on to find our seats. Not the usual front coach for me this time (even though requested) but coach C, but still in the right area to hear 56111 working hard though.

A change now to the planned tour route. After a prolonged stop we set off directly towards Stockport and Manchester - the booked route via Warrington and Newton-le-Willows being abandoned owing to a landslide at Kenyon cutting which had closed the line. Top marks to the organisers as an additional stop was arranged at Stockport to drop off/pick-up the Manchester contingent - and an additional train was laid on to do this - formed of two 2-car Met-Cam 101 DMU's!!

101693 & 101694 (in Strathclyde PTE livery!!) were noted as we pulled into Stockport, the special shuttle arranged to get our passengers from and to Piccadilly station. We lost those passengers who were just having a day in Manchester and we collected as many for the bash over the Pennines and down the two freight branches. Our area of the train filled up as several friends joined us here, including top "101 man" David "dud for the day" Russell who informed us that 101694 was due to be withdrawn on Tuesday (guess which one he'd travelled in then)! He'd also spent the morning bashing 101's around Manchester (sorry David - your secret is out!! I'm sure there is suitable treatment available to get you back to a normal existence like the rest of us....).

A stagger through Denton and Guide Bridge then followed and, after a pause at Stalybridge, the real thrash began. 56111 proved itself to be a real "thumper" when worked hard (some just scream, but others thump well too and this as one of them). We ran through Huddersfield and via the Bradley Chord and Hebden Bridge to head south again into the Manchester suburbs. I kept a good look-out passing Newton heath depot for my last 142 (041) and 153 (332) but no sign of them - mind you a couple of the 153's on depot were so dirty you couldn't read the side numbers!

Back to stagger-mode via Ashburys (where we were passed by 142041 - with thanks to David Russell for spotting it as I was on the wrong side to get its number) to Guide Bridge here we were booked for a crew change. A shot distance then to the Up & Down Goods Loop here we were due to have the assisting engine attached. 60050 was being quoted and sure enough it duly appeared and was attached to the rear of our consist. 56111 was however still in charge as we continued through Hyde ("not the place to call for a doctor" said Tony - this being the former area covered by Harold Shipman, now doing "time" for finishing off many of his patients!). At Woodley we took the freight line towards Bredbury. There had been some discussion about exactly which branch we would traverse - Bredbury is effectively two single line branches, one to a waste terminal and the other to a stone terminal. The former had been done before on railtours but most people I spoke to seemed to need the latter. We were kept in suspense as we stopped at the points where the two lines split. We set off again on the right-hand track which, according to the Quail track diagram books, was that to the waste terminal - not the line most wanted. The Pathfinder steward in our coach got his ear bent about this but suddenly someone on the right side of the train said there was a further line going off to the right - this was actually the line into the waste terminal, so we were indeed heading along the stone terminal line. Seems the track layout has been revised since the Quail was published - apologies to Steve (our coach steward) for bending your ear without good reason!!

We made it to the railtrack limit - which was just short of the rail over-bridge which carried the line from Ashburys to Romiley. A class 101 unit passed in each direction before we left again. We retraced our steps  to Ashburys then took the line to Manchester Piccadilly, using the through platforms to get us on our way to Eccles. Until this point we were keeping pretty well to time, but..... 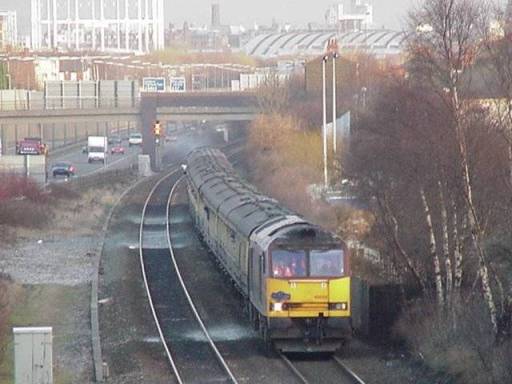 ....On the approach to Eccles station we were stopped. Our move was to cross to a shunt neck which gave access to the Weaste branch which curved down and under the route we were on. After a long wait it was announced that we were being held as there was already a train on the branch and we would have to stay put until it came off. 66602 eventually appeared "light engine" and with the branch now vacated we drew forward into the shunt neck, now running half an hour late - effortlessly!! 56111 ran us down the gradient an under the line we'd just been on. This "branch" is quite short and we only made it as far as Weaste Junction, about 5/8 of a mile from Eccles station. After a short pause 60050 dragged us back up the hill.

Back in the shunt neck and 60050 was unhooked before we set off the short distance to Manchester Victoria where we exchanged passengers again. The thrash from 56111 up the bank from Victoria to Miles Platting was very enjoyable. Slack timing actually meant we had got back quite a bit of the late running and indeed it stayed this way the remainder of the journey back (at least as far as Barnt Green). Indeed, between Crewe and Stafford we were even running a few minutes early!

Not a bad day out, though again perhaps at the higher end of the acceptable price range for what was on offer. Then again, maybe I'm the problem in not needing much in the way of track these days!

Quote of the day (overheard by Andrew Wilson) said by a Pathfinder steward to a passenger :

"Go and sit down and your steward will come and give you one".

(the passenger concerned was only asking for a tour brochure!).

All distances, in miles and chains (M & C), are taken from the timing sheet given out on the train. No attempt has been made to verify the mileages given. Mileages for diversion via Stockport have not been determined.