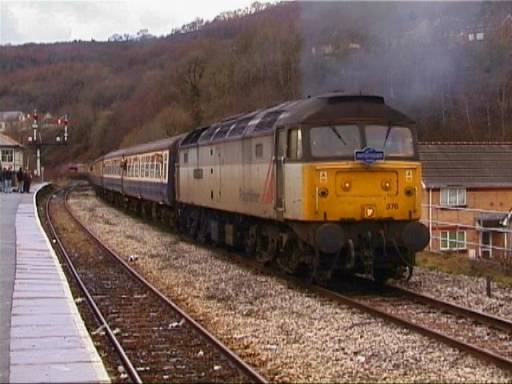 The railtour Pathfinder probably wish they'd never organised! Originally planned to run in early 2000 it was to cover several freight branches in South Wales, all of which I required :

First to go was the line at Bridgend but it was replaced by Tower Colliery (no good for me, did it with a pair of 33's in 1995). The tour was then postponed because Tower was not available. Shortly after an ABP Newport Docks was withdrawn from the itinerary. Oh, and somewhere along the way the Worcester Goods Lines were also lost also. Despite all this I didn't cancel my booking, though in the week leading up to the tour I very nearly did when I heard that Fifoots had also gone - in other words only Tower and the Bishton Flyover were left!! Two things kept me on it - a £10 voucher that arrived with the ticket (to be used against another tour) and the fact I was on to score the Freightliner class 47 - and I only need 10 more of the class to have had half of them for haulage. Quoted in the days leading up o the tour was 47301, then 47295, and 60081, then 60023 as assisting engines - all required. The stock was getting from Crewe to Manchester with quoted 56051 (could also be done at a small additional cost) - although this was required too, the 02.30 start, and similar return time (Sunday morning), put me off that one!

I arrived at Barnt Green along with a few other acquaintances to learn the choice of spoon had changed again - 47376 "Freightliner 1995" was working the train. A quick check of the book and I was still smiling as it was also a winner. 56007 had done the morning run to Manchester (required, but can't get them all).

47376 duly arrived about 20 minutes down and on our little group got on and headed down to our seats in coach A at the front. Well, not all actually, two of our group decided the bar was nearer and headed that way instead!

As we headed south coach A (somewhat unusually a mark 2 TSO) was pretty chilly - what passed for train heating as we had got on had given up altogether well before Cheltenham Spa. We later heard the train heat generator had died! We picked up further passengers at Cheltenham and Bristol Parkway before heading for the big hole in the ground that takes you to another country - no, not the Channel Tunnel, the Severn Tunnel.

After passing Severn Tunnel Junction we were routed onto the own relief line at Magor - good news for me as this piece of line is shown in the Baker Rail Atlas and I required it. Bit of a stagger along here and we eventually pulled into Newport about half an hour down. A pause here as 60023 was added to the back of the train. Good - at least one of the engines rumoured to be working had produced!

Fairly fast run to Cardiff and we then managed to get through Cardiff Central station without being stopped. Loads of 37's, 47's and 66's noted as we passed Canton depot. We were routed via Ninian Park to gain access to the Valley Lines route to Radyr. Here we were halted to allow a Valley Lines service train past - a service to Aberdare....the same line we were about to take!! Although we thought this would mean a slow journey as we followed the "stopper", it actually wasn't so bad. That said, by the time we waited in the loop at Abercwmboi to allow it to pass us going the other way, we were running an hour late.

Past Aberdare and the pace slowed as there are a couple of TMO (Train Man Operated) level crossings. We made it right into the colliery, 47376 stopping just short of the run-round loop. As per the norm these days it was a case of not being allowed off the train - though as it was raining heavily I'm not sure too many people were that upset.

Some very liberal timing heading south actually saw us catch up our lateness and we even arrived back at Abercwmboi almost on time. We didn't need all the booked waiting time here before the northbound service train (a class 143 pacer) arrived so we actually left a few minutes early. We continued in this vein all the way to Newport where a break of just over an hour as scheduled. During this time 60023 was removed and 47376 run-round and attached to the other end of the train. Someone also managed to kick the train heat generator back into life during the layover, so things were a bit warmer the rest of the way home!

As booked, the Bishton Flyover was traversed, so at least I could fill in a bit more track in my Rail Atlas.

Somewhere on the way to Bristol Parkway a rumour began to circulate that 47376 was short of fuel and, so the rumour went, a class 92 was to be added at Bescot. 92015 or 92025 were being quoted....or 66204. All required by your truly but I didn't really fancy a late night wander around the Midlands to score one more locomotive. As we wended our way towards Worcester Shrub Hill it was confirmed (as much as any of these rumours are) that 92015 would be added at Birmingham New Street. As the next booked stop was Stafford (at 21.08, if on time) I decided that this would be one 92 that "got away" until another time.

My favourite stretch of track now - 47376 had to get up the big hill (Lickey) from Bromsgrove to Barnt Green. There was another rumour that the driver had asked for the direct route so as to give a straight run, but we had gone via Worcester as booked. Once turned back out onto the mainline at Stoke Works Junction there is only just over two miles to gain speed before hitting the bottom of the 3 mile 1-in-37 climb to the summit. All credit to the 47, we topped the summit at about 15mph - 376 was fair screaming though!

I left the train at Barnt Green where it was running about 10 minutes early - not a bad day out, though in my mind perhaps it was questionable value for £32.50 for what had turned from a very good freight line tour initially into a straight out-and-back run to Tower Colliery. Others, particularly those requiring the line to Tower, however may not agree with my view.