Notes :
(1) Train was booked to reverse at Howth.

Source : Jonathan Wilcox (joined/left the train at Dun Laoghaire, plus left at Birdhill then rejoined Limerick...chasing 159 on a service train!) 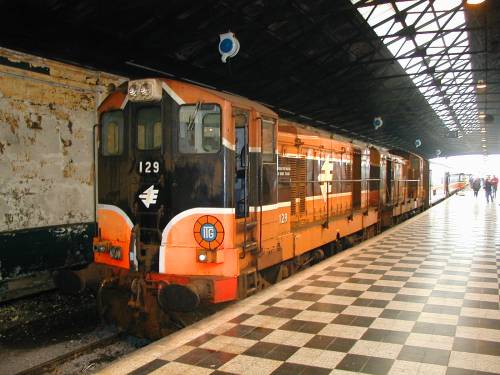 Saturday morning, 0300.  One place you would not expect (or want...) to be is a cold, wet and windy car park somewhere just metres from the Irish Sea.  I think it's called Holyhead...  We were there for the 99-minute ferry crossing to Dun Laoghaire (my 35th trip over the water) for the ITG railtour.

Stena Line's burger barge (HSS "Stena Explorer") was sitting at the linkspan as we [me and my Dad] boarded the minibus bound for the ferry terminal (station entrance more like).

There was time to spare before we had to check in so a walk down the platforms was taken.  It revealed two Coradia units (you know my thoughts on these so I won't bother repeating them) - 175007 + 175005 (instruments of torture).  Gen had already come that the overnight wasn't supposed to me a tractor any more - mega :-( - so we expected this to be the Birmingham (within twenty miles of where I live).  A West Coast HST set was seen across the concourse so it was decided to go and view.  The "HST" was 47725 and a West Coast set - oh.  Required haulage I think.  It soon departed on ECS and revealed another duff-hauled VWC set was seen behind.  47709 - my highest mileage shove-duff - with 110 miles - you can see I try to avoid the things.  A familiar sound - what the...  37401 and a FNW set rolled in across the way on 1D99.  Nice....

Anyway, on with the tour.  The "99 minute crossing" was achieved in 2 hours as always and we found ourselves at Dun Laoghaire - in cold, wet and windy conditions yet again.  Oh-oh.  Gates to the station are closed - gotta go the long way round.  Once on the platform, conversation began, and apparently the "chosen pair" of GM 121 Class locos (built at GM's place in Illinois in 1960/61) were going to be 127 and 129 :-))))))))).  129 was one of my last two for haulage (122 was the other - restricted use.)  Anyway I'd started off the day with one of my last 11 operational Irish locos for haulage in the bag so I was happy.

"Will everybody come over to this platform to catch the DART (Dublin Area Rapid (?) Transit) to Connolly (Dublin's main station for the "eastern" side) because the charter train's terminated there" said an English voice, surprisingly not the Irish bloke who is usually at "DL".  He had been there when we arrived though, but nothing would surprise me as, back in 1998, we had an unfortunate run-in with him :

US:    Arrived on 0410 sailing from Holyhead for a day's suburban bashing.  It was on time.  Walked up to the station.  " Two adults and a child Dublin Day Runabout please".
MICK:    "Hang on a minute, I've got to go and see this train off".  A southbound DART was just arriving.
US:    "But that's the train we want to catch"....

A phone call to Train Manager Peter Jones revealed that the tour was heading southbound from Connolly.  Back over the bridge.  Mega smiles when 129 came in on the front of 127 (high mileage).  We had been allocated seats in Coach A, by the way.  It was on the back when the train rolled in.  Then:  what on?  The two locos were uncoupled and headed away from the train.  Err this wasn't supposed to happen.  Then they thrashed past and thundered away around the corner towards the capital.  Goodbye required haulage.  But then they came back and were nailed on our end of the train.  Good.  I don't care if however many passengers (intending..) are stuck at Bray. I'm going to Limerick.

Off round the corner and away towards Dublin.  At Connolly station an Enterprise cross-border service was just leaving with Control Car (we call them DVTs over here) number 9004.  Nice number series.  Mega dreadful (the basher term not the term used to describe Connex) GM loco 078 was sitting at the front of the Mark 2 coffin set to form the 0828 service to Sligo.  My favourite by the way is 077, and it was hoped that she'd be on Rosslares so that we could hopefully leave the tour at Rosslare and enjoy 105 miles of pure GM thrash - not the silent junk just ordered for EWS.  The 071s (there are eighteen of them) actually have the same engines as the Freightliner 57s - but without silencers :-))))

A spirited, to say the least, journey was had after clearing the freight-only line round to Islandbridge Junction and away to Ballybrophy.  The two 77 mph (it was measured in kph) locos did well.

Arrival at Ballybrophy was into the Down Loop platform which is rare track.  It is only in Ireland where they would let you run round your train (last time we were propelled!!), then cross over Ireland's busiest main line before being propelled back across the freight spur into the "Limerick bay".  However, the following service, the 0950 local to Limerick, was hauled by bo-bo 159!  Required!  However, we opted for the man of steel move which included getting 129 for the hundred miles, and 159 just for haulage.....allegedly.  Graham Roberts, however, leapt and boarded the service train.  Puzzling, as he'd had 159 a couple of times earlier in the week and was blowing up a day's rover.  It didn't matter though as he'd be coming back on the ferry with one day left spare, so he took up the other day anyway.

Birdhill - where??? - was the location of a photo stop.  (129 had been cleared for "the ton" now).  We were running late though, and you can't trust photo stops...  Coming into Birdhill talk in our coach was of getting off here for the service train behind - just for the hell of it.  Me, my Dad and John Herbert grabbed our bags on the approaches to the station, and ran to the door.  We stopped for the token exchange, the door was thrown open and the three of us got on the platform.  Nobody was getting off with cameras, so it looked like the photo stop had been abandoned.  But the driver was going nowhere, so everybody got off with cameras and the 5 minute photo stop was taken - in the rain.

The train left in a cloud of clag and it was clear the driver was "going for it".  We then realised that only one other bloke had got off with us, and was running off up the station drive.  Perhaps he was a normal and had got on the wrong train...

Matey came back to the station.  "One of my last four Bo-Bo's" he gleefully exclaimed.  The train was late, but he'd somehow judged it to return at about this time.  How?  John asked him - he'd been to the pub round the corner.  What pub?????  The one three minutes away.  Anyway 159 turned up 50 minutes late, and not the bus previously expected.  Away we went to Limerick

Major flap all round - would it make the tour??  As we crossed over onto the double track at Killonan Junction, I went to the window and stood expectantly, waiting for the "new" pair to thrash past on the tour, 127 and 129 supposed to have been relieved during the 90 minute stop at Colbert terminus, Limerick.

Some ITG stewards were on the platform.  The tour was in Platform 1, and we were going into platform 4.  Everybody jumped off, and ran towards the concourse, thought better of it, and took the quick route over the concrete buffer stops and down the platform, Peter Jones showed us into the back door and away we went.  Relief.....  However, the booked pair of 121s was now a mixed pair of 121 and 141 Classes - 123 and 151.  Both dud.  Never mind.

We took the flat crossing at Limerick Junction (22 miles away from the city of course), and passed 157 at Tipperary on a cement.  This is what life is like..a pair of bo-bo GMs (1960 and 1962) hauling a rake of Cravens, Sheffield - built stock (1960) with a Werkspoor/Dundalk steam generating van.  Shame that the "generator" wasn't an ex-BR Mark 1.

At Carrick-on-Suir, County Kilkenny, most of the participants got off for a look at some of the ITG's gear.  John Herbert didn't as he was unconscious after an extended stay at the bar.  Locos there were:     C226, G616 (in the shed), B103 (BRC&W built), Northern Ireland Railways shunters 1, 2 and 3, and silver loco G601.

As at most other "rural" stations, the photo stops included trudges through major undergrowth to the trackside to obtain "that shot".  We left on time towards Waterford, and at Waterford West I was finished: 077 was in the yard!!  Unfortunately on a beet train - however the money for the Rosslare/Dublin single was safe in my pocket.  We headed off across the waterside to Rosslare, but not before a photo stop at Bridgetown.  Here, we just wandered off the end of the platform into the yard.  If we wanted to we could cross the track in front of our train and take shots from more undergrowth, or fight with a huge pile of ballast, when you got to the top a really good shot could be obtained.  Many did not even reach the top :-)))))) (I did).

At Rosslare nothing much was to do.  P&O European ferry "Francoise" was in the port, and 087 was up on the pier (sidings - the old station).  The tour was shunted out and run round and propelled back into the station.  Back up to Dublin.

I have no shame in admitting to the world that I was asleep up what is arguably Ireland's most scenic route.  I finally came to at Connolly, for the run to Howth.  Which wasn't.  We were going to Howth Junction station, on the Belfast main line, and our pair were going to run round and take us back.  Four of the five new DART sets were at Fairview depot (8201/8401, 8202/8402, 8204/8404, 8205/8405).  We passed through Kilbarrack - Ireland's roughest station in my view.  If you read some of the ITG's tour brochures many of this station's descriptions are quite amusing, including:

This station defies description.
Used for French nuclear bomb testing in the 1980s.
and the current one.......  Recently re-developed - you cannot be serious!!

At Connolly, station pilot 144 sat smirking as we passed the depot, which also included 153 by this time.  A very good run down the suburban route - unfortunately too dark to see the mileposts :-((( and we were back at Dun Laoghaire.  It was just Dad and me on the ferry from our party who were going back, the rest were following the day after.  Thankfully Stena kept check-in open for us and we were on the ferry in no time.