Whatever you think of "GM Products" they're here to stay - whether it be what you eat or what you travel behind! Today however gave the first opportunity for a variation in the recipe - the first scheduled haulage by GM's built in Spain by Alstom, the Class 67.

Being the first railtour to employ a Class 67 I decided it was "the done thing" to be on it from the beginning, so an early start was required to get to Finsbury Park for the 07.43 departure. As I sped past Bounds Green depot on a WAGN Class 317 unit I spotted our train in the sidings, complete with 67014 at the head - as predicted on Rail-gen the night before. Previous rumours about a pair seemed to be therefore unfounded.

Once at Finsbury Park I gathered various rumours together and the common thread appeared to be that, yes, we would get another 67 - to be attached at Exeter on the outward leg and detached again at Newton Abbot on the way back. A 66 would work from Plymouth Friary to Carne Point.

The tour rolled into Finsbury Park's platform 1 about 10 minutes before the booked departure time, so chance for a photo (if you had a wide angle lens that is, as the loco was right to the platform end) and also it was my first chance to hear what one of these 3,200hp machines sounded like. I've heard they sound similar to Irish Rail 071's but that was not my immediate impression - more like an IE 201 in my opinion, certainly a little different from a 66 - and slightly louder too.

I was in coach J, the fourth from the front and as we departed Finsbury Park the 67 was clearly audible until the general sound of a mark 1 coach "took over" at about 20mph or so. Our route was via the North London Line and Acton Wells to our next pick-up point at Ealing Broadway. Timed for about three quarters of an hour, the journey could easily have been achieved in about half an hour - hence we were staggering well and stopping frequently. Passing Acton Yard a number of other GM's were noted, including 59204, 59205, 66215 & 66236 (though I missed the latter - everyone else around me saw it!).

The run to Reading wasn't much to write home about but, with a now full compliment of passengers aboard, the Berks & Hants line gave the 67 a chance to show us what it could do. And it did! 100mph was reached quite easily and on several occasions there was some very impressive accelerating - particularly as the train was a fully-laden 13 coaches!

As we approached Westbury (booked crew change) an announcement was made that the stop might be extended "for operational reasons". As we pulled into the platform we noted 67010 - so a change of plan obviously. 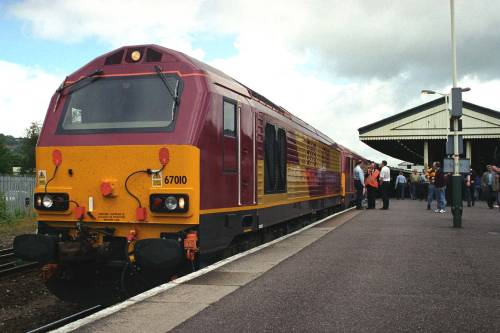 Being a nice sunny day (at least it was in that part of the world) I imagine the pair looked good as we sped along the sea wall between Dawlish and Teignmouth. As we approached Laira depot we curved off the GW mainline and took the single track round past the depot to Plymouth Friary. Here 66199 (as predicted) was waiting for us and was duly attached to the rear (about to become front) of the train.

Taking the other side of the triangle as we departed had us heading for Plymouth's main station and another break. Loads of moaning from the station announcer stating that passengers were not allowed onto the sloping platform ramps. Loads of moaning from the passengers as, without going onto the platform end ramp, a decent photograph of either the 66 or 67's was impossible - even with a wide angle lens!.

Time for a gripe from me here - as a paying passenger on many railtours I'm getting increasingly peeved at how little thought seems to go in by the organisers to enable those who paid for the train to actually get some decent photographs of it themselves. Hertfordshire Rail Tours seem particularly guilty of this in recent times, though the other major railtour organisers fare little better (except Mercia Charters, but then their recent tours have been in Belgium where things are somewhat different). Just another sign that railtour organisers don't want to be bothered with enthusiasts - arguably the very same people who, in the past, supported these railtour organisers and gave them the opportunity to be where they are today....?

Gripe over - well, almost. Why no headboard for the tour? As the first scheduled passenger train to use this new class, surely something on the front was called for??

Right, moaning over from me. On with the tour. 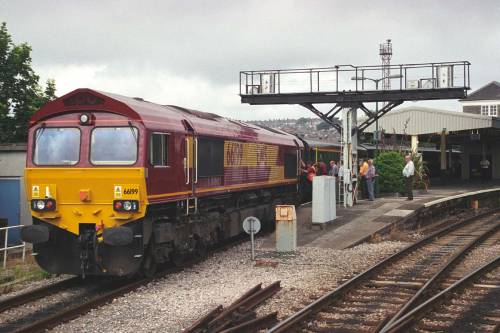 66199 waits it's turn for action at Plymouth (photo: Gary Thornton)

Off we set with 66199 for Cornwall and Carne Point. Definitely the part of the day for the scenery lovers. The weather remained very pleasant too which was a bonus. Very slack timings back from Carne Point to Lostwithiel still didn't prevent us being held for 16 minutes at the junction whilst a Penzance HST passed by then a Plymouth-bound DMU was allowed in front of us (now, that's so typical that I can't be bothered to rant on about it here). being behind a stopper meant the expected slow journey to Plymouth - again, however, as we actually arrived 2 minutes ahead of plan I can only assume the stagger was intentional planning by Railtrack!

Another scheduled break in Plymouth (wasn't the first time punishment enough?) but at least it was a chance to re-stock on provisions (GM or otherwise). The SPAR shop on the station certainly did good business whilst we were there. I came out of the shop to discover that a Virgin Cross-Country service had arrived and terminated. It then formed the 17.10 departure to Leeds (or somewhere equally "oop north"). Glancing at the power cars I then discovered that one of them was 43093 "Lady in Red" - the last Virgin one I need for haulage!! What to do?? We were supposedly non-stop to Westbury but other information suggested we would stop at Newton Abbot to drop off 67010. If this was true, and the train was platformed where it stopped (not always guaranteed with an operational stop), then I could get 43093 "in the book" by way of a single ticket to Newton Abbot. After some debate however I decided the risk was too great (and the financial penalty too if the move failed!).

It probably would have worked as we were platformed to remove 67010. Our return route was as the outward, again with a crew stop at Westbury. Timekeeping all day was excellent and we were storming along the B&H only a minute or so adrift at each timing point. On our way through the London suburbs it became clear that we could possibly make Finsbury Park a few minutes early - but no doubt not enough to make the 21.36 Kings Cross to Peterborough train which could get me on my way home. To get it would require a 7 minute early arrival, else I (and a lot of others) would have a half hour wait for the next service.

We were slowed as we took the line from Camden Road to the ECML - probably to enable the 21.36 to get the road ahead of us I assumed. Yet, as we rounded the curve, we could just see a 365 unit waiting in Gasworks Tunnel to allow us the road first. Of course, this didn't mean getting the Peterborough train was a "dead cert" - it would get the fast line and so could still get past us and arrive at Finsbury Park first.

....and it did!! Luckily however the WAGN driver of the 21.36 was thoughtful enough to delay closing the doors on his train until we had all poured off our train and on to his (for which he has our thanks). Not sure what the passengers already aboard the unit thought when we all piled on it!

Verdict : a pleasant day out - good scenery, good weather and a good opportunity to sample what a 67 could achieve on what was quite a heavy train. Shame the coaches weren't 125mph or we could have taken the 67's to their limit - maybe another day....