After last weeks fiasco with the Dorset Mariner I headed for the tour with the uncertainty over the 37's. After having two previous tours postponed due to one thing or another it has not been a good month for railtours. This tour was to start at Swindon taking routes to Chippenham, across to Bath, Bristol and up to Birmingham and Derby and through some lines in Yorkshire up to York and in to Tees-side with traction provided by Class 37's and a 56.

An early morning departure saw me catch 47851 on 1V39 down to Birmingham from where and I and quite a few other enthusiasts alighted to go our different ways. A quick check to find the platform saw be back on to Platform 9 and to the end of the platform for the arrival of the 37's. The tractors arrived looking splendid. On a personal note I thought 038 was better than 029 as the Civil Engineers livery was smart. I boarded the train and found my seat. Surprise, surprise, some people boarded the train thinking that it was a Virgin Service bound for Newcastle!!!!

The train departed at 9.51 and we departed though the tunnels with the tractors engines reverberating and making loads of noise. Just near Proof House Jct we passed 37401 "Mary Queen of Scots" with an inbound NWC service. Saltley provided two 66s (062/016) and quite a number of 47s. The route took us though Water Orton and on towards Nuneaton before taking the freight line to Kingsbury Jct. We were held at Kingsbury Jct for the aforementioned Virgin working and headed off to Derby our final pick up point.

At Derby was noted a few 170s of both Midland Main Line and Central as well as a 158 on the Matlock branch! (the usual traction is a 170). The people boarded the train and I was surprised that someone I knew from previous rail tours was in the seat next to me. The departure from Derby was spirited and by Chesterfield we were one early, from here we took the line to Barrow Hill, Beighton Jct, Treeton Jcts to Rotherham Masborough. We passed through Chesterfield and took the Barrow Hill line and it was a shame to see the old sidings in and around Barrow Hill not being used. At least the depot at Barrow Hill has been reopened. On Barrow Hill I saw D9009 "Alycidon".

From Beighton Jct it was required track for me and we passed through the remains of the entrance to Tinsley and Orgreave Colliery. On the approach to Rotherham we passed over Booth Roe Scrap yard with Class 47s and 50s in evidence. One of them I believe was 50045 "Achillies", which was one of my final 50s. On the approaches to Doncaster we were 20mins early and we were discussing what might happen to the train at Doncaster. The yard at Hexthorpe Jct was all ready for the engineers to take possession later on in the day. In the end we graced P8 with 66503 at the back of the station. Two enthusiasts (from Retford) decided to board the train at Doncaster after gaining permission from a steward. We left in a hurry but by Arksey loop we got put in to the loop and waited for a number of GNER trains to pass. A spirited run from Doncaster to York saw us see a 15 minute advantaged turn in to a arrival at York 2 late!!! Arrival at York was greeted with 56027 in Loadhaul livery sitting under Holgate Bridge. People alighted for a wander around the city while we went on further in the search for more track.

The train left York at 13.31 up the ECML passing the National Railway Museum and the Wagon works. The run up to Darlington was spirited. We were booked in to one of the loops at the back of the station but went in to the station. 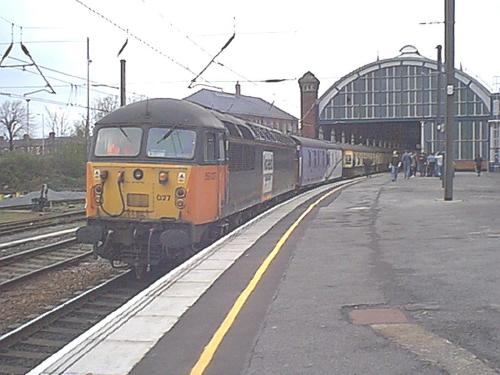 We left Darlington with the grid in charge for a tour of Teesside. We took the line from Darlington to Dinsdale, Eaglescliffe and up through Stockton where we saw the scrap yard with 31's and 37's abound. This turned a few heads especially considering the shed invasion that has come through the country. During the Stockton area it was quite rough with council houses, boarded up areas and lots of different people. However, people still waved at our train and, considering the last time I came through Stockton on a Deltic tour, no-one decided to pull their trousers down! (you must've been looking out the wrong side of the train then David as I had the misfortune to see at least one bared bum as we passed through Stockton! Must be some sort of "northerners greeting" perhaps? Gary). We left the running lines at Billingham Jct on to the branch line to Seal Sands travelling through much of the heavy industry north of the Tees. Some of the quality of the track was quite rough but the journey was interesting as we passed through ICI Haverton Hill, Phillips Imperial. All down the line people were stopped at Level Crossings filming the tour or taking photos.

The reversal at Seal Sands was made and the train again meandered through the Teesside industrial heartlands including also the Riverside stadium (home of Middlesborough FC). Some people saw a Northern Spirit 156 on the approaches to Middlesborough! The journey back along the branch was quite uneventful apart from all the gen coming through! The train took the line at Billingham Jct and passed through Stockton, Eaglescliffe, Yarm down to take the freight loop at Northallerton on the the East Coast M ain Line. By this time the rail was pouring down and along the whole journey back to York we were kept on the slow lines. Gen came through that the train was going to be on time arriving at York. Where do people get the gen from. We were 15 down at Tollerton and 24 down at York. People alighted while the others went off. The grid was dropped and we awaited for the departure time back. 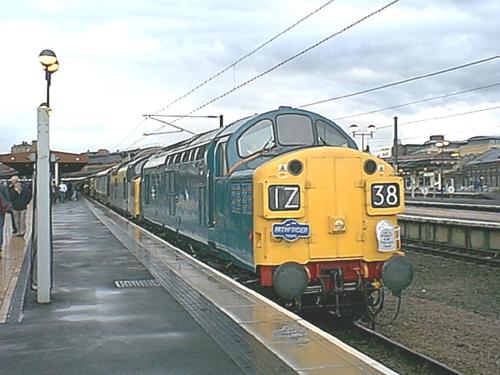 The route this time was different as we took the line through Colton Jct, Milford Jct, Moorthorpe and back on to Swinton Jct. Passing Ferrybridge was noted 66166/66094/66154. Two of which were required for sight (only 65 out of 250 EWS examples to see...). The journey back was quite quick and we looked at the schedules to see that Sheffield was to be a Crew change with 10 minutes allocated. We arrived at 18.31 and departed to alight since we had onward connections to other places. And I also had to suffer a bus journey due to engineering work at Doncaster.

The tractors left Sheffield and I found my train to Conisbrough from where a bus would take me to Doncaster and a train from Doncaster to Scunthorpe. The tour unlike some of the previous weeks was a success for me personally, scoring all three locos and some of the routes covered. After the recent problems I bet Pathfinder were relieved that the tour went off without a hitch.

** stopped in Darlington station - mileage not checked against booked timing point of "Up S.S." (wherever that was!). All distances, in miles and chains (M & C), are taken from the tour booklet. No attempt has been made to verify the mileages given.