Notes:
(1) Brian Halford comments: This tour was spoilt by short notice advice from the organisers that the trip was starting one hour earlier than originally planned.  Nice haulage by King class 6024 King Edward I with the (unknown) top speed between Castle Cary and Taunton. The outward run was spoilt by long waits for loco servicing and pathing stops of 42mins at Didcot and 52 minutes to pass through the Frome loop. The early start, plenty of beer and dark evenings contributed to me sleeping through most of the return trip after Taunton with return home after 0100. In my opinion too much for a day tour. 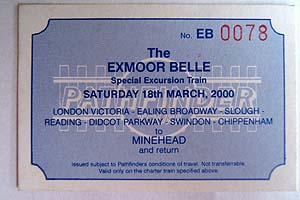