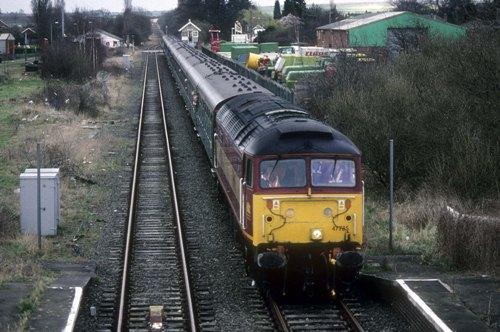 Another of Hertfordshire Rail Tours "forgotten tracks" series, this trip was to visit the Killingholme branch near Immingham. With some other freight and "rare" track being covered too, several locos on offer and a couple of hours fester (sorry, break) in York this tour offered something for most people.

With a 08.33 departure off Kings Cross it gave me a relatively late start (compared to some outings at any rate) to reach the tour. Shortly before I got to it I had a message on my mobile phone to confirm the train loco was 90026 - good news as I required it for haulage. This loco was to take us as far as Grantham - not much to report on-route to Peterborough except that we were platformed into No.3 rather than the more normal platform 4 or 5. As we departed, noted on the stabling point were 58037, 58031, 66068, 58043 & 66084. As we reached Helpston however we ground to a halt. One of the loco crew was then seen walking down the train towards the rear. Problems? Soon after and a GNER service (headed by 91011) passed us on the down Stamford line - an unusual move and confirming all was not well with us. We then set off again and as we sped up we actually overtook 91011 and its train, which by now was proceeding along the ECML down slow line! Our brakes then went on and 91011 overtook us again - and it had the road onto the fast line ahead of us. A PA announcement confirmed we had been stopped following a report of a door on our train not being properly closed.

At Grantham we had a booked 30 minute stop to change our Skoda for a diesel loco, though in the event our delay meant a 9 minute late arrival. 47785 "Fiona Castle" was stood waiting for us. A relatively quick swap had us underway again just a couple of minutes astray from plan. Continuing along the ECML to Newark we then turned off right towards Lincoln. At this point I thought back to one of my last trips along this line from Newark to, in that case, Cleethorpes. Motive power was 55021 "Argyll & Sutherland Highlander" so I'll leave you to work out how long ago that was!

Of course the route has altered a little since the days of Deltics to Cleethorpes - Lincoln St Marks has long since closed and services are now diverted on a new chord via Lincoln Central. "Fiona" up front kept the pace up nicely and as we approached Wrawby Junction we were running almost 10 minutes early. At Barnetby a short distance on we were due a 22 minute stop to attach another diesel on the rear. High time for a farce to unfold, this tour is going too well to plan....

We all baled off to see a "light" class 66 alongside the East signalbox, which seemed a strange place to be as it would still have to run all the way to Wrawby Junction to gain the track to get it on to the rear of our train. We watched a stream of freights pass through, headed by 60097, 56102 and 60008 respectively. As the last one approached there was a cry of "everyone back on board please". Hmmm, change of plan it seems. Yes - it had been decided to attach the 66 (turned out to be 041 - a required sight, as well as haulage, for me!) on the line going away from Barnetby East signalbox. Despite the change of plans, this operation was completed and we were still early through the next timing point, Brocklesby.

A short run then to Grimsby Marsh Junction where we turned left onto the freight lines towards Immingham. Having done this before I knew we were in for a long slow stagger. I wasn't wrong! I was looking forward to passing Immingham depot - for the sole reason that my last class 56 required for sight, 56128, is stored there. It may be, but not so as to be "on display" to a passing railtour :-(

On our way to Humber Road Junction we also passed 08405 shunting in the yard. At Humber Road Jn we stopped to enable us to reverse direction and take the line towards Killingholme. This was 66041's first (and only) work on the tour - a distance of about 3 miles. The BSC Ore terminal was particularly busy with a 60 and a couple of 56's (027 and 101) present with trains. We traversed the Killingholme branch as far as New Inn Level Crossing - beyond which the track was not considered in a fit state to permit the passage of a loaded passenger train.

We retraced our route to Humber Road Jn and then completed the Immingham "loop" coming back on to the passenger network at Ulceby. A short time later and we returned to Barnetby where 66041 was removed from the back of our train. Onwards to York now and a leg-stretching break. The route was via Kirton Lindsay Gainsborough Central though, a line that doesn't see too many passenger trains each day.

Two hours in York from 16.46 - what to do? Not really enough time to visit the railway museum etc. Two "attractions" however modified their opening hours - the model railway by the station and Collectors Corner. I had arranged to meet a friend in York and, along with another mutual friend who was on the tour, the three of us wandered into the centre of York. Here we visited the unusual attraction of the mark 2 "FO" coach which was on display in the main street! It was no. 3174, part of the new "Northern Belle" VSOE operation. A tour through the coach showed us how much work had been done to bring what was a relatively modern (!) air conditioned coach up to Pullman standards of luxury. We were also handed a brochure of the forthcoming tours - a snip starting at a mere (?) £115 for lunchtime outing to £750 for a trip through to Paris. Ouch!

The compulsory trip to "The Maltings" then followed and, after a pint of "Black Sheep", it was onward to a local fish & chip shop for some food. Back at the station it was soon confirmed that Skoda 26 was our motive power home. We left bang on time and the driver really had to motor to keep up with the tight return timings. And a superb job he made of it too - keeping to with a minute of time at most of the timing points. A sustained run of high speed south of Retford even had us getting a little ahead of time then a couple of slack timing points saw us get further into credit. Peterborough came and went and by Stevenage we were 8 minutes early.

Unfortunately this is where the early running came to an end - a passenger in first class had become ill and required medical attention so an ambulance was called. Credit to the Hertfordshire stewards as we were kept informed via the PA of the reason for the delay - though once on the move no announcement was made to say if the patient was alright or not. We left Stevenage 10 down and by Potters Bar where I got off a further 2 minutes had been lost.

Mileage for Killingholme is shown in brackets as the train only reached New Inn LC which is 51 chains short of the end-of-line according to BR Track Diagrams published by Quail.