Here I am again then, the number one reviewer (in who's opinion? - Gary) back by popular demand with another railtour review.

This railtour had all the ingredients to make the best cake of the year, but did it live up to expectations? Read on....

(I am the number one reviewer;  As voted by my wife and I.  Actually I volunteered to do the write up, nobody asked).

D -16 !
The tickets and timings arrived 16 days before the date of the tour; this was amazing as nowadays we normally expect them to arrive 16 hours before the tour! Unfortunately the train was due to depart one hour earlier than originally advertised, but a bigger disappointment was in store as the second 08 had been removed from the itinerary. This was the second time in as many gronk tours that the number of 08's actually featured was half of those advertised. Many people were not impressed. By way of compensation, Pathfinder stated that they would try and get the 60 swapped at Eastleigh. However many people doubted that would happen as the tour was already fully booked, so why would anyone pull out the stops to make amends?

D
Departing from Selby at 04:50, I opted to drive to Chesterfield to pick up the tour. On time a headlight appeared out of the darkness, and 56089 (!) rolled into the platform. After climbing aboard, it was time to find out the rest of the gen as we stormed south in darkness towards Derby. Interesting things of note out and about on the rails that day were:

Our tour was now allocated 60004, but would not be getting a second 60. Nobody else seemed surprised by this fact, as there are no booked 60 workings off Eastleigh, so there was never going to be a 60 there anyway! People were disappointed, but not surprised. So we were one 08 down, and now without compensation.

The sun was just rising as we left Derby, and each of the pick up points was met by a healthy amount of people waiting to board. The route into Birmingham New Street was to be via the Lifford curve so that we were facing the right way for onward progress via Tyseley. Saltley revealed 5 66's amongst other things, many more 66's were to be seen during the day! On arrival at New Street. 37415 was noted on a service bound for the NWC. 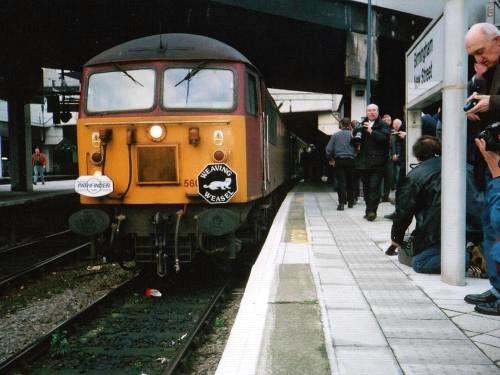 We slowed as we passed Tyseley and the depot had 33108+021, 45112, 40118, 31106+462 and many other 31's. Progress to Leamington Spa was slow; but then again we were constantly running ahead of time due to the slack timings given by Railtrack. I know I have mentioned before how the amount of recovery time is starting to become frustrating, granted nobody wants to return home late, and complex enthusiasts tours must be hard to time, but I certainly don't think that the correct balance has yet been reached.

A 4TC unit was passed at Fenny Compton en-route to/from MoD Kineton. An early arrival in Banbury saw this pick up point turn into an unofficial photo-stop! Again the "grid" stormed, and Oxford was reached in no time at all. We came to stand in Oxford on the centre road briefly, before the grid was let out of its cage again and thrashed us out of the station, much to the amazement of the passengers stood on the adjacent platforms!

The grid having pulled off the front of our train passed us again to run north, and the driver certainly played to the crowd by giving the grid a lot of thrash, many blasts on the horn, and the traction inspector waving out of the window was met by cheers from those on board. Full marks to that crew, it does make a difference when the crews get into the spirit of things! We were given 40 minutes for this simple engine change, so again we were stood waiting time. On time we departed with all three engines powering, although I had to ask for confirmation about that as even being sat in coach A, I couldn't hear any of them, and definitely not a note out of the 60. The fact that the 60 worked to Didcot was needed by some people as they wanted to get off and travel to Manchester for 66108 on the HRT. Didcot had 08904, 37047 & 60098 on the stabling point.

Under a fine but overcast sky we proceeded ever southwards, 73109 coupled to an EMU was seen at Basingstoke, and the next stop, Andover, was to be a booked photo-stop. This proved to be an excellent move by Pathfinder, the set up was perfect (not that I ever take photographs!) and everyone took advantage with the station car park full of people taking photographs and stretching their legs. Returning to the platform it became clear that all was not well with the 73's. 73108 was shut down, and 73129 had a fire bell ringing! I am told that the 73's only provided power between Didcot and Worting Junc., but again I wouldn't take that as solid gen. 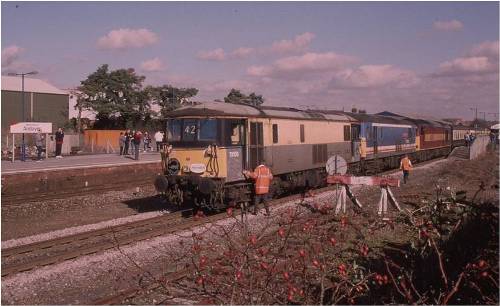 So with just the 60 providing the power, we marched onwards, via the Laverstock Loop to Romsey where the driver said to the second man, "Hey aren't we meant to go left here?" " Yes" came the reply, so as the route was set wrongly we came to a stand in Romsey station. A phone call to the signalman corrected the error and we were on our way to Eastleigh.

The gronk took us through the station non-stop and on into the East Yard, and those that were on board will know what I mean when I say that this gronk must have been fitted with ABS brakes! With the gronk left behind, it was now a simple matter of the 60 taking us to Bristol TM. Passing back through Eastleigh station for the last time we saw 47766+47/8 on the return Portsmouth H service. Southampton F/L terminal housed 6x47 and 2x57 and at this point I was informed that 58036 had passed Bromsgrove 17 early whist running L/E to meet out tour at Bristol.

At Westbury we were required to stop to allow the Avonmouth LPG train to overtake us, and we had passed this train twice already, once at Southampton, and secondly at Romsey. 66111 duly stormed through and we boarded the train once again. For the record Westbury played host to 66023/073/085/100/155/174 59103 60073 08664. 66111 might have thought that it had got the upper hand, however it was looped just after Bath to allow us to pass! Please tell me that a class 1 train wasn't looped at Westbury for a freight train to pass, only to pass it again further down the line!

Arrival in Temple Meads found 58036 waiting to join in the fun, and was quickly coupled to the, now front, of the train. The Hastings thumper unit was in the next platform so 58036 next to that must have made a good photo. Barton Hill housed a surprising number of locos, 08, 47's 60's and 67001. We were held at Dr. Day's Junc. to allow 47702 dragging a HST to pass, before we crossed over on to the up Filton line. After reversal 60004 took us down my only piece of required track of the day, the Barrow Road branch line. I am pleased to report that we got down to about a loco length away from the end of the line, and definitely as far as any passenger train had been in many years. 58036 took us back to the Barrow Road GF where the 60 was detached and we started the long trek back north behind the bone. The run back to Chesterfield was enjoyable and quick, a good run up the bank (Lickey) was completed in two minutes, and the only place we were stood waiting time was Derby for a Leeds bound HST to pass, an understandable pathing stop that was also brief.

Arrival back in Chesterfield was on time, and a quick storm home had me back in Selby at 23:00.

Verdict: Pathfinder stated that some people were disappointed, as they had to miss out, because the train was fully booked. However with the loss of an 08, no second 60, nearly a total of two hours sat not moving in places where we couldn't alight, and all at a cost of £45, many would feel that they had little to be disappointed about.