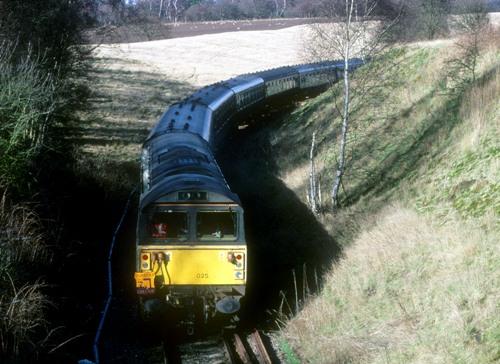 58025 at Edwinstone on the Thoresby branch (photo: Roger Geach)

This tour was to take us in to the heart of the East Midlands Coal field along branches that have been threatened with closure as a result of the influx of Imported Coal. The traction was to be provided by a Class 58 and a Class 60 and for much of the journey top'n'tail, although that all went pear shaped as you are about to see!!!.......

It was my intention to take the Virgin train from Doncaster to Birmingham in order to catch the tour from Birmingham. But in the end due to engineering work trains were diverted and this added journey times. However, living in Scunthorpe made Leicester the obvious choice for pick-up, so I got to the station for 5.45 and witnessed two freights passing each other literally at the same time! Traction to Sheffield was provided by 144009 and got to Sheffield to see 47851 pull out with the train to Bristol.

The Midland Main Line set I was catching was late leaving Etches Park, and although I had plenty of time I didn't want to be too late in to Leicester. The train finally arrived and was quickly on its way. The train went well until Tapton Jct where the engineering possession took place and we were side by side with 58020 on a MGR. From this point until we were on the Erewash Valley Line we were doing 20mph all the way. 37682 & 37698 were noted on a Engineers train together with 58005 as the train went towards Toton. Getting anything on Toton was a hard job as the train flew through, although 66193 and several 37s, 47s, 56s, 58s were seen. In fact there were many 58s out working which was good to see.

At Leicester I waited for the charter and looked at the endless turbos and HSTs knocking around...... At approximately 10.15 the crowds on the platform moved towards the edge, and then to my horror a 66 was on the train. 58036 had taken the ECS to Swindon, but was declared a failure by the driver (unknown to the day after the loco had just come out from repair! - genie were up to their old tricks again!). EWS could only send out 66087 from Westbury as far as Toton. So I boarded the train and we left on-time, and I found I was sat with some people I knew from the Urban Suburban 2, Crompton Collier and the Southampton Docker, and more recently a trip to Sheffield to try and catch 47747 to Chesterfield. But that is another story.

The train departed Leicester on-time and an announcement was made that the 66 was to come off at Toton and be replaced by 58025 and 60049. The train made steady progress and we were soon passing Syston, Sileby and Loughborough. Trent South Jct approached and the train slowed down for the stop at Toton. This allowed us to take a note of what was on Toton. We stopped near the loco inspection point and saw 60049 and 58025 ready to come off the depot.

Departure from Toton came at 11.18 and we headed up the main line to Pye Bridge Jct to take the freight line to Kirkby Lane End Jct. We had traversed part of this route on the Crompton Collier as far as Pinxton for the line to Bentinck Colliery. We joined the Robin Hood line at Kirkby Lane End Jct and picked up speed to Shirebrook Jct and by this time we were 5 early and took the line round to Warsop Jct. Here were the remains of the once mighty East Midlands Collieries, There were remains of numerous sidings and the remains of old pit heads and stock piles of coal. We arrived at Welbeck Colliery Jct at 12.17 (7 early) and traversed the Welbeck branch. At this point and until Shirebrook Jct on the return we were very early on our schedules. The Welbeck Branch was traversed and we saw the colliery buildings. British Industry at its best! We reversed and went towards Thoresby Colliery Jct and into the exchange sidings number 1. Again we set up the branch and it was quite a pretty branch, with what looked like Sherwood Forest all around us. Evidently the loco was two loco lengths from the bunker. Pity that we were not able to go any further. The transfer from Thoresby Colliery Jct exchange sidings on to the track for High Marnham required another reversal!

The train left Thoresby Colliery Jct and headed out towards High Marnham Power Station. We were held at Boughton Jct to allow a shed with National Power JHA's to pass us from High Marnham Power Station. We passed through the site of Tuxford station and over the East Coast Main Line. On the approach to High Marnham we were stopped at the signal before the main entrance to the power station. We reversed and set out towards Rufford. After passing through Clipstone East Jct we saw no less than 16 burnt out cars, and one car which was not burnt out that belonged to an enthusiast. We passed over many junctions with lines going out to Clipstone Colliery, Bilsthorpe Colliery, and with another reversal at Rufford we were heading out to Toton (again!). The other side of Clipstone Curve was traversed and we took Shirebrook Jct curve down the Robin Hood line to Pye Bridge Jct, Trowell Jct, Radford Jct, Lenton Curve, Attenborough Jct into Toton Jct, where we were stopped for a while for a path in to the main yard.

In the depot approach 58043 was waiting to come out of the yard, and the rumours went out that this was our loco. True enough 58043 came on to the train and we waited out for a path to Leicester, but with the diversions there was an increase in passenger traffic through the station. At this point I would like to apologise to Jon Starkey and who-ever else was on the 47/8 which was working a HST diagram, and wanted to know what was on the depot. But because we were in the way they could not see anything!!!

Departure from Toton came and we passed 66031 on a scrap train (I had seen the loco three times that day! After seeing it at Aldwarke and Toton in the morning!). We took the high level lines out off Toton over Meadow Lane Jct and joined the main lines at Trent South Jct. By now it was dark and so the only way of working out where you were was by using Quail Track diagrams. Just before Loughborough we were held outside the station to allow a 150 to pass. We were soon getting ready for the Leicester stop, and so ventured to the front of the train to go and talk to Gary Thornton. Leicester approached and we arrived 4 down. I said good bye and left the train.

I crossed the bridge and bode farewell to the Sheffield / Retford people who I sat with from Leicester. The 58 departed Leicester and as it did my train arrived from St Pancras with 43083 / 43072. I passed through Toton (again) and approached Clay Cross (again!) and the engineers had again possession so we were crawling all t he way to Tapton Jct and took the Dronfield line. Another HST was taken from Sheffield to Doncaster and while at Doncaster I saw 66150 / 66159 and 37886 and 56041 on engineers trains. The journey back to Scunthorpe allowed me to reflect on a good day out with 4 locos instead of the booked 2. Although I would have not wanted the 66 all the way and back, the branches traversed and a couple of 66s required for sight.

# : shunt move from Thoresby Colliery Jn Sidings to the mainline not shown in timing sheet.